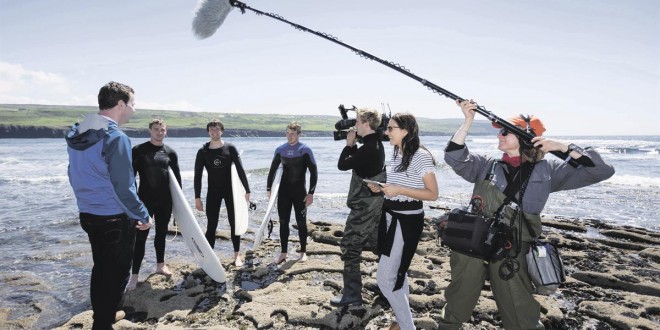 One million Germans to view Doolin

North Clare’s more picturesque spots will be seen by about a million people in a television documentary airing in Germany next month.
A crew from ARD, a national German TV network, is in Ireland this week as guests of Tourism Ireland, filming for the documentary along the Wild Atlantic Way. The documentary will be called Weltreisen meaning World Travel.
Footage captured in Clare includes the Burren and the Cliffs of Moher, as well as the Weltreisen crew enjoying a surfing demonstration in Doolin. The 45-minute programme will air in July.
This year, Tourism Ireland is placing a major focus on the Wild Atlantic Way in its promotions around the world. The Wild Atlantic Way is being highlighted on television, in print, online and at international tourism fairs.
“We are delighted that the crew from ARD agreed to create this documentary featuring Clare and the Wild Atlantic Way. The programme will be seen by around one million potential holidaymakers for Ireland encouraging them to come and sample Clare and the Wild Atlantic Way for themselves,” said Zoë Redmond, Tourism Ireland’s manager for Central Europe.
“2013 was a record year for German visitors to Ireland and Tourism Ireland has an extensive programme of promotional activity under way throughout 2014 to keep the momentum going and build on that growth. We are placing a major focus on the Wild Atlantic Way, which we know has tremendous appeal for German holidaymakers. We are also promoting key events, including Limerick City of Culture 2014,” she added.

Previous Is Brennan to be Clare’s next dual player?
Next Amy’s essay wins Austrian trip