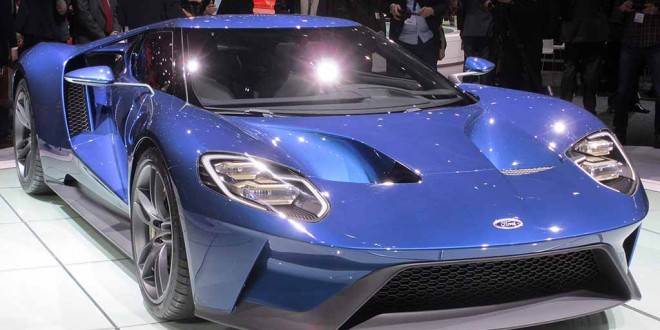 Ford's GT will have a limited production run. It's powered by a twin turbo 3.5 litre V6 producing more than 600 bhp.

After the years of doom and gloom, it was wonderful to see the Geneva Show back to its sparkling self, with a plethora of new sports cars launched. Ranging from faster versions of more ordinary cars to real dream machines, there was something for everyone, demonstrating that the motor industry at last seems to have got its Mojo back.

We first saw the Pininfarina Sergio as a concept at Geneva two years ago and there was no indication it would ever go into production yet it made a return this year as a full production car albeit with a run of only six cars. Based on the Ferrari 458 Spider, it’s official name is now the Pininfarina Ferrari Sergio.

Also in the concept realm was the Quantino, a quite breathlessly gorgeous creation although in this case, there was even more going on under the skin. Powered by Nano electricity, essentially two tanks of ionic liquids, one with a positive charge, the other with negative, it has a claimed range of 1,000 km. Even if it was conventionally powered, it would be stunning.

Back in the real world, Hyundai introduced their replacement for the outgoing ix35. They’re bringing back the Tucson nameplate for this car. It looks a handsome beast and to my eyes, now looks bigger than the car it replaces.

When Audi introduced their first R8, going head to head with the likes of Porsche and Ferrari, it was a brave move, but here they are again with an all-new model, looking even better. V10 power is on offer but an all electric e-tron will also go on limited production. Offering 456 bhp and a claimed range of 280 miles, it can be charged in as little as two hours. If the figures turn out to be accurate, this will be some machine.

Although Dacia had little new to announce this year, save a new 1.2 litre engine for the Duster, they celebrate their 10th birthday this year, so Happy Birthday Dacia.

Opel are continuing to raid their history to find new car names. The Karl is a small city car, developed in Germany but built in Korea. It will be here by the Summer. Sister company, Vauxhall, are reviving the Viva nameplate for this car, which may or may not be a good idea.

SEAT showed the intriguingly named 20V20, a sharp looking mid-size crossover intended to signpost their imminent move into this market, a process which should begin in the next year or two. The name comes from Vision 2020, which is the target date for a full range of crossovers to become part of the range.

Parent company Volkswagen had a lot of new hardware, including an all-new Touran, based on the latest, lighter MQB platform that already underpins the Golf and Passat.

Other new variants included a plug-in hybrid Passat GTE, to join the existing Golf GTE in the range. A Passat Alltrack also joins the range, a four wheel drive estate with a higher ride height to cope with some light off-roading. Another new estate is the Golf GTD with 181 bhp coming from a 2.0 litre TDI.

By far the prettiest car on the stand though was the Sport Coupé concept, a precursor to a new CC. It’s moving upmarket though, to bridge the gap between the Passat and Phaeton. If it looks like this it should fly out of the showrooms.

Skoda showed their new Superb for the first time and this third generation model really looks the business both inside and out. Sleek looks and a much improved interior should please both new and existing customers.

Renault are expanding their range with a new mid-size SUV, the Kadjar. Based on the Nissan Qashqai platform, it will come with a choice of two or four wheel drive.

Along with facelifted versions of the Avensis and Aura, Toyota debuted the Mirai, their first fuel cell vehicle to go into limited production. What was surprising was that despite the flamboyant exterior, other aspects of the car looked so conventional. Fuel cells are an interesting and promising concept but their time hasn’t come quite yet.

Of the volume manufacturers at the show, Ford had arguably the best performance credentials with most interest centred around the long-awaited Focus RS. With wild looks, 320 bhp and four wheel drive for the first time, it should produce a stunning drive, although realistically, we shouldn’t expect the car here ’til early 2016. Before that, we’ll have the Mustang, with right hand drive for the first time and power coming from either a turbo four or full fat V8.

The new Ford GT was also on show and was as stunning as any Italian exotic. For contrast, an original 1967 GT40 and an immaculate British registered Escort Mexico were also on the stand.

The other mainstream manufacturer with a claim to performance was Honda, who finally revealed the production version of their NSX. It’s powered by a V6 DOHC twin turbo motor, coupled to a nine speed twin clutch transmission. Hybrid power comes from two motors mounted in the front and one in the rear.

Sticking with performance cars, the Civic Type R is finally here. For the first time, it’s turbocharged, producing an impressive 310 bhp at 6,500 rpm. To back this up, there’s 400 Nm of torque, developed at 2,500 rpm, proving that the Type R is more than a top-end screamer.

The new Jazz and HR-V also made an appearance. Interestingly, both of these cars feature a HDMI socket in the cockpit, the first time I’ve seen this. It allows devices such as tablets and phones to connect easily to the dashboard screen. It’s an interesting development that is sure to be taken up by others.

Land Rover introduced a facelifted Evoque, now with a nine speed auto. The new Discovery Sport and a hybrid Defender completed their display while sister company Jaguar showed the final version of their crucial 3 Series competitor, the XE.

The 2 Series Gran Tourer is a sister car to the recently-introduced Active Tourer, BMW’s first front wheel drive car. Given that it’s a larger car, it comes with the option of seven seats.

One of the most attractive cars at the show was the Kia Sportspace, more evidence of chief designer, Peter Schreyer’s, influence on the Korean company. An estate car, it previews the next Optima, which we can expect to see at the Frankfurt Show in September.

Finally, onto the real performance cars and first up is the new Ferrari 488 GTB, the replacement for the 458. This is the first time Ferrari’s mainstream model will be turbocharged to compensate for the slightly smaller engine. Now 3.9 litres, it produces an impressive 661 bhp for a top speed of over 200 mph.

Arch-rivals, Porsche, have finally allowed the Cayman to come out of the shadow of the more expensive 911, by releasing the track-focused GT4. With a 3.8 litre six cylinder engine producing 380 bhp, it should give its bigger brother a real run for its money. Not to be left out in the cold, the new 911 GT3 RS gets 500 bhp from a bigger, 4.0 litre engine with a double clutch gearbox as standard.

With many supercars now using hybrid power in the search for performance, it’s perhaps unusual to see Aston Martin use nothing more than a traditional V12 in their Vulcan. Not designed for the road, for £1.9 million owners will only be able to use it on a racetrack.