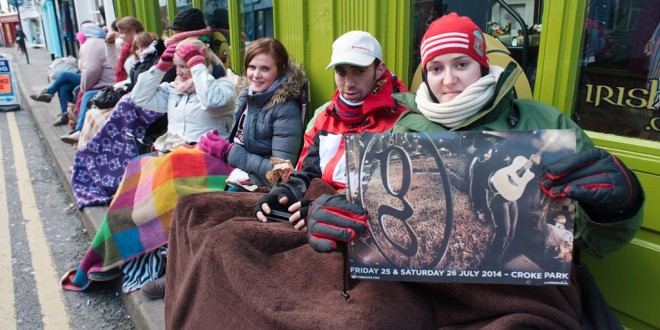 Lissycasey's Emma Cleary was the first to queue outside The Irish Shop in Ennis for Garth Brooks tickets, when she arrived 28 hours early at 5a.m. on Wednesday morning. The tickets will not go on sale until 9.a.m. on Thursday morning. She has since been joined by a number of Garth fans seeking tickets for the event in Croke Park in late July.

GARTH Brooks fans began queuing outside the Irish Shop in Ennis at 5 o’clock this morning to ensure they can get their hands on precious tickets for his Croke Park concerts in July. That’s despite the fact the the tickets don’t go on sale until 9am on Thursday morning.

By late Wednesday evening, the queue was tailing back to The Market area. Keeping warm by wrapping up in layers of jumpers and blankets,  fans were in high spirits, singing countless Garth Brooks hits.

Restaurants in the town are planning to open early to facilitate those who will be joining the long queue overnight.

The Croke Park shows, two special performances before his worldwide tour, which is due to start later this year, are called The Garth Brooks Comeback Special Event. Over the two nights, Garth and his fans will celebrate his legendary career – a career which saw him named the No 1-selling solo artist in US history, sell in excess of 128 million albums and receive every accolade the recording industry can bestow on an artist.