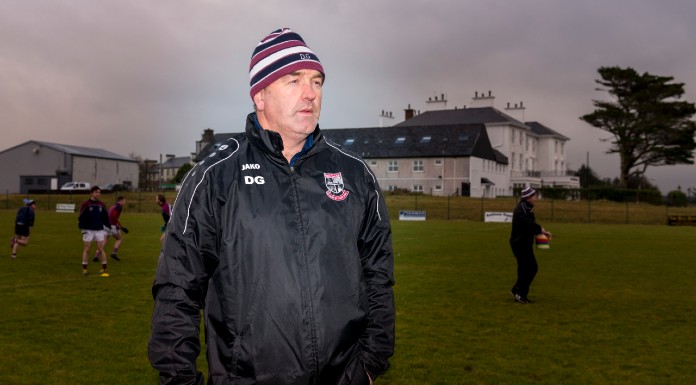 Garrihy Counting Down The Minutes Before Munster Club IFC Final

Reaching a Munster final was not something that was on Donie Garrihy’s radar when he answered the call from his beloved St Breckan’s this year.

The North Clare men will hope to top off a fairytale 2019 when they meet Templenoe in Sunday’s intermediate provincial club showpiece in Mallow.

Garrihy says while they had targets to hit, being at this stage of the championship was never in the conversation.

“Our initial goals were to hold our own in the Cusack Cup and to win the intermediate championship. We didn’t ever really push it too much on the players in relation to the championship because that would put them under pressure and I wanted to keep that away from them. I had heard all about the talent within the group but there is that old saying that hard work will beat talent when talent doesn’t work but if you have the two of them, you have a great chance. Hard work is the more important of the two though, you just have to have that. You hear about these great players in every code and how hard they work so all that graft has to go in behind the scenes because it cannot be a holiday camp” he stated.

While this is not his first foray into management, Garrihy was drafted in at one of the lowest ebbs in the clubs recent past. Their top tier status was gone while the managerial seat had been left vacant. He feels while it has been a successful turnaround, there is a huge amount of work that has gone on behind the scenes to reach this point.

“Everyone has to bring their own mark to it and people have to be given time to do that. Maybe the previous manager Aidan O’Keeffe didn’t have that time to put his mark on it and it was unfortunate for the club and for Aidan that it came to an end so fast. You have to leave your own print in what you do and time is needed to bed in the extent of the project. The club is a huge part of that project and we can see all the young people playing football and there is a lot of energy and a lot of enthusiasm and that transmits from the flagship team all the way down to the youngest players we have in the club. If your top team is going well, then things like that will happen. There was a 500 club draw and 98% of the tickets were sold at €150 each so that is a lot of money and a lot of commitment from the people in our community who bought the tickets. It shows there is backing from the community and that is great. The players got their two or three tickets to sell during the year also and they all sold them so they did their part with that and they are doing it on the pitch too. It is a lot of money for the club to be raising and we need every bit of it on the route we are taking in the Munster championship. We also have a players gym in our club that we are not in debt for and they have paid for it. There is great credit due to the board of the club for all the backing they give us, and we like to think that we are backing them on the field too” said Garrihy.

Momentum is certainly on their side with a perfect record of seven wins from their seven championship wins to date in 2019. Garrihy is in no mood for that run to end anytime soon.

He said: “We are unbeaten in the championship and my aim is that we remain unbeaten in the championship and that brings us on to Templenoe. They are there on merit but so are we. This won’t faze us and it certainly doesn’t faze me. I would rather be inside looking out than outside looking in. Everyone is nervous but I think that nervousness is about not bringing our A-game to the environment of a Munster final. There is a nervousness in everything but that is a desire to do really well. People think that it is about shying away in the corner but our lads are on their toes and they are determined to play as well as they can. I know it is an age-old thing but as a manager, if you come home on the bus and everybody left everything on the pitch, the result will take care of itself. Anything I have ever asked of the players, they have given it. In this code and in other codes, you might have to give lads a rest to ground them. We have done that here and I have done it before in other codes and you get the best out of lads that way I think. There are others then who don’t need that because they are characters and they are explosive people. You have to handle people differently and that is just a skill of management”.

Standing in their way are Kingdom kingpins Templenoe but the prospect of facing some household names is not something Garrihy is getting wrapped up in.

“As a boy going to matches with St Breckan’s or whoever else, you were always told to look after yourself in whatever you were doing. You have to do the best in your position and let the management look after the rest. You have to have your own team in order and have them in the right place, in pristine condition at an elite level of fitness. The likes of the Spillanes, the Morleys and all these guys, fair play to them because they are in a Munster final on merit too. It just so happens that we are there on merit too and we had to win a quarter final and a semi final to get there. They played a Waterford team and Cork team to get there and we will take that challenge head on. I just cannot wait until next Sunday, I want it to be tomorrow” he concluded.