Gardaí in Ennis are continuing with their investigations into a number of burglaries in the town during the past week.

At around 4am last Thursday morning, a hooded man was seeing trying the windows of houses in Ivy Hill on the Gort Road. This person was then seen inside an adjoining apartment of a house, was disturbed and fled the scene on foot.

Gardai say the man wore a grey hooded top and was a small man approximately 5’2” or 5’3” in height and had a sallow complexion.

On the same day , at around 1.45am, a house in Glenina on the Gort Road was entered through the patio door. Items stolen included a red “Hello Kitty” purse, a purple HP notebook and a silver Packard Bell laptop.

Between 12.30am and 2.30am last Sunday, a shed was broken into which was adjoining a house in Radharc na Locha. Items stolen in the burglary included a red Marugana hedge trimmer, a green Florabest chainsaw, a yellow 300 Karcher power washer, a red strimmer and two wind deflectors from a Ford Galaxy car which was parked at the rear.

Two  burglaries were also committed in the Ard Aoibhinn estate on the Limerick Road and Springfield estate, near St. Flannan’s college. A man was arrested for these crimes and is helping the Gardai with their enquiries. 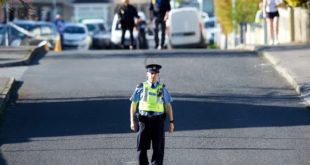