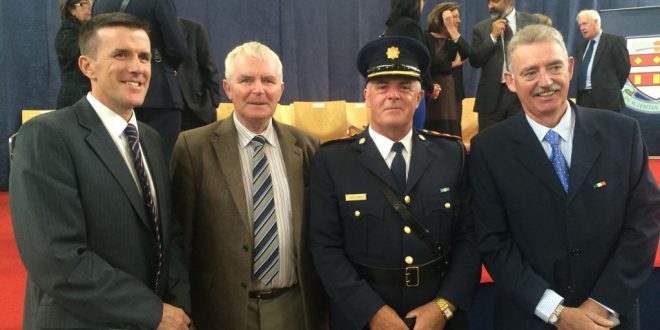 THREE Clare-based gardaí, two of whom are now retired, have received bravery commendations for successfully rescuing a man and three children from their blazing home in a Shannon housing estate more than a decade ago.

Detective Stephen Ryan, Sergeant David Condren and Detective Gerard Flaherty were presented with first-class commendation certificates for rescuing the family, who were trapped in an upstairs bedroom.

The awards were presented by Garda Commissioner Noreen O’Sullivan and Tánaiste Frances Fitzgerald at the Garda College in Templemore.

For Sergeant Condren, who retired as sergeant-in-charge from Killaloe Garda Station in 2012, this is his second time attending a bravery awards ceremony as he is also a recipient of the Scott Medal, an honour given for “an act of personal bravery, performed intelligently in the execution of duty at imminent risk to the life of the doer”.

He received this medal arising from the 1988 raid of Caher Post Office, which resulted in the fatal shooting of Hugh Hehir.

“Myself and another detective were up there and were on mail escort that morning and a shoot-out took place. We got Scott Medals for that,” he said.
Detective Garda Ryan recalled the day of the Shannon fire in 2005, as he was the one who took the initial call that came through the 999 line.

The Kildimo man said, “I remember coming into work at 5.50am. We were starting at 6am. I answered the phone and the person said, ‘there is a fire out of control, Guard. This sounds like the real deal. I could hear children screaming in the background’ and I took it from there. My two colleagues were coming into work at that stage and the three of us went down.”

He said as they came to the rear of the house, it was very evident that the house was on fire. They then went in through an unlocked back door.

“We went through the utility room and made our way halfway across the kitchen but the fire was too fierce to go any further. We came back out and there was a kid’s sandpit in the back yard. The lid was off it, so we doused our jumpers with water and we went back in again and we were crawling at this stage. We didn’t get in as far as we did the first time, the fire was that bad. We were maybe in as far as the utility and we were driven back by the heat and the smoke; the smoke was just unbelievable. You could hear the fire before you could see it. It was roaring.”

They were unable to get to the stairs, which was in the kitchen and already engulfed. “At that stage, luckily enough, a neighbour called to us that he had a ladder at his garden wall and he threw it over the wall to us. They hadn’t put the ladder to the wall and I was up the ladder.

“You couldn’t see because the windows had been blackened by the smoke but I could see what appeared to be finger marks on the inside of the window. When I got up to the top, there was an adult and three kids. I was shouting at him to open the window but he was shouting ‘back draft, back draft’. He was worried that it would pull the fire in.

“It took a bit of time to convince him because at that time I had very little equipment with me in the way of a flash light or baton to break the window, so I eventually persuaded him to open the window to get the kids out,” Detective Ryan said.

When they got the window open, they saw there were two seven-year-old twin boys and a three-year-old girl in the room. Detective Ryan said he will never forget the little girl he helped rescue.

“She was the prettiest little thing you’d ever see; blondy hair and her face was black and all I could see were her eyes and her white teeth. I can still remember her. I had a 10-year-old and a three-year-old at home myself at the time,” he said.

The three gardaí formed a human chain and handed the children down one-by-one, passing them on to a neighbour as they rescued the father.

“The room was filled with smoke; it was dire straits at that stage. We just got them out and we got the father out and after that the fire brigade and the ambulance came along. It was frightening but any of my colleagues would have done the same thing,” Detective Ryan said.

At the time Detective Ryan was not even attached to Shannon Garda Station and it was only by chance that he was there, having been asked the previous day to come in to cover that morning.

“I wasn’t supposed to be there. It was just with the luck of God. The timing was important that we got down there so quick. It was very bad. If they were in there much longer, the smoke could have got the kids and not the fire,” he said.

Detective Flaherty agreed that the timing was crucial. “But for the neighbour who rang in that morning, they would have perished in the house,” he said.

“You could see the smoke coming out of it. We tried to get into the house but we couldn’t get in. All you could see inside the window were these black faces,” he added.

Looking back on the incident, Sergeant Condren said, “I do remember when the last kid came to me. I was getting them down and the neighbour was there and we were handing the children to the neighbour. The third kid hung onto my epaulette so tight I actually had to force the epaulette off to get the kid off me so we could get the father. Thankfully, we got the father out. He had put coats and that at the side of the door but by the time he was coming out, the smoke was coming in. We had this done and dusted and the fire brigade arrived after we had them out.”

Sergeant Condren recalled that the father was traumatised and the kids were “absolutely petrified”.

“You’d want to turn around and give the kid a hug but you have to keep going,” he added.

Detective Ryan said if it weren’t for Garda Paul Crowley from the Garda Representative Association and Chief Superintendent John Kerin, “we wouldn’t be recognised for the good police work”.

“Personally, I feel that without them it wouldn’t have been recognised. It was a great day. It was nice to be recognised. We appreciated the award and it was a fabulous opportunity to meet with the Commissioner and the Tánaiste,” he added.

Sergeant Condren said the commendation was not expected, as it was just part of the job.

“You don’t expect anything really, you’re just doing your job. Guards are never going to tell you, ‘you have won the lotto’. Guards are there in times of need. It’s one of those things; you weigh up the pros and cons. We knew twice after going into that fire that we couldn’t get in that way. We were trying to find another way in and we were lucky that the neighbour brought a ladder and through that then we got them out,” he said.

The retired sergeant said the funny thing for him about the day was he told his wife prior to receiving the commendation that “there was a bit of a house fire; we put a ladder up against the window and we got them all out”.

“Then on Thursday she said to me, ‘you never told me you went into that house twice; you just told me you put a ladder against the window’,” he concluded.