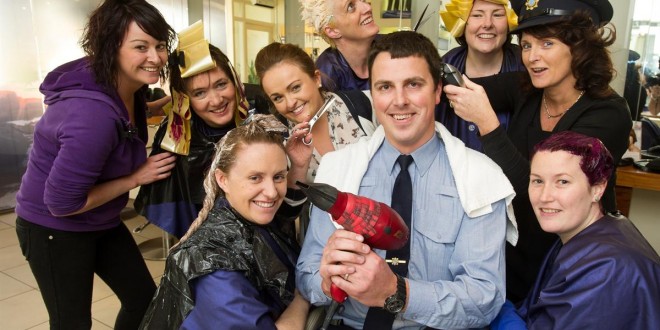 UP to 17 members of Ennis Garda Station, including the county’s Chief Superintendent, participated in a shave or dye event in aid of the Irish Cancer Society on Friday.

The Ennis station is one of the few garda stations to have embarked on a shave or dye event, since the initiative began.

Organised by community garda Deirdre O’Doherty the decision was made to theme the shave or dye in line with Ennis being the first town to secure a purple flag status. As a result those getting their hair dyed will have it dyed purple.

Speaking about Friday’s initiative Garda O’Doherty said, “The main reason for organising it is because of the amount of people who have been touched by cancer. Even through our own station, a number of people have been touched by it. I was approached by one of my colleagues, who said I would be the one to take it on. I had thought about it and I said I would. I sent out emails and asked people if they would be interested and I got a few gardaí on board”.

Having secured all the sponsorship packs, she felt that it would be nice to have the dye colour as purple and this would also encourage the local business community to get involved.

Roots Salon on Abbey Street provided the venue and the facilities for the shave or dye and are donating their tips for the week to the cause. A few gardaí, included Garda O’Doherty, have already had their hair dyed or shaved. However on Friday the majority taking part had their hair dyed or shaved, including Clare’s Chief Superintendent John Kerin.

“I emailed him and he thought it was a great idea and he came on board straight away. I’ve had great feedback. People are looking at my purple hair saying it is crazy but fair play,” Garda Doherty said.

Eight of the participants  had their hair dyed and a further nine had their heads shaved.

“Two Clare hurlers came in on Friday to do some of the shaving. It’s all for the Irish Cancer Society. A lot of people in our station alone have been affected by cancer in one way or another and in Ennis town as well. I thought it was a good idea,” Garda O’Doherty outlined.

Gardaí are aiming to raise in the region of €5,000 for the charity.