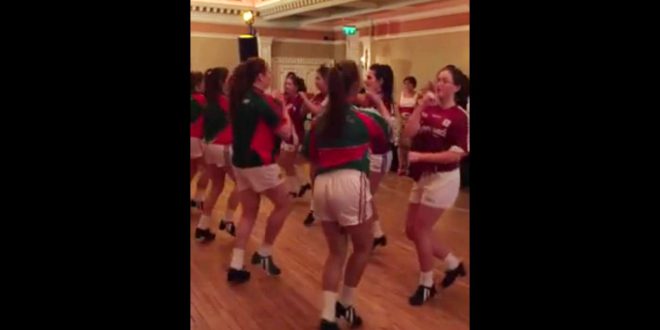 Half a milllion see Galway take on Mayo in Gort

An unusual dance routine performed at a wedding in South Galway has gone viral, with over half a million views since a video of it was posted online.

The footage, filmed by Noel Uniacke from Kilconieron, Craughwell, features the Gavin School of Dancing from Peterswell taking to the floor at the wedding of Sandra Lynskey and Trevor Blake in the Lady Gregory Hotel, Gort.

The dance sees Galway take on Mayo in football, complete with referee, pre-match huddle, warm up, throw in, tackles and hand passes.

A few days later, Noel posted the video of the dance to his Facebook page and it got in the region of 1,500 views. Recently, however, it got a new lease of life.

“The wedding was on December 30. I posted on Facebook on January 4 and it went up to about 1,500 views. Then, last Saturday, before my nephew’s wedding in Australia, it came up on my timeline that it had been shared and I re-shared it. About an hour later I checked it and it was gone to 9,000 views and I thought it was a mistake. Then half an hour later it was at 13,000 views. Then I thought there was a problem with Facebook! I turned the phone off for the wedding and when it was over, it was 25,000. After that, it went ballistic and was up to 60,000 in a few hours,” Noel told The Clare Champion.

“The bride and groom are blown away. It’s like party time over there. I have been getting calls and messages from people saying they are just blown away. Trevor’s reaction was just shock at how all these people could be seeing it. I shared it with a few people in the UK and in America and it just seemed to really take off from there,” he added.

Sandra and her sisters were former students of the Gavin School of Dancing.

“It wasn’t anything I had seen before and a total surprise. There was a slight technical hitch with the music but the dancers were very composed about the whole thing. People couldn’t believe it on the night, the reaction was huge,” Noel outlined.

Of course, the dance was not the only unusual feature of the wedding. In December, Skehanagh was badly affected by flooding, impacting on the bride and the guests.

“People came out of their houses that day on tractor and transport box to come to the wedding and home the same way at about 3am. The bride had to take an 11-mile detour to get the church where normally it is three miles,” Noel concluded.