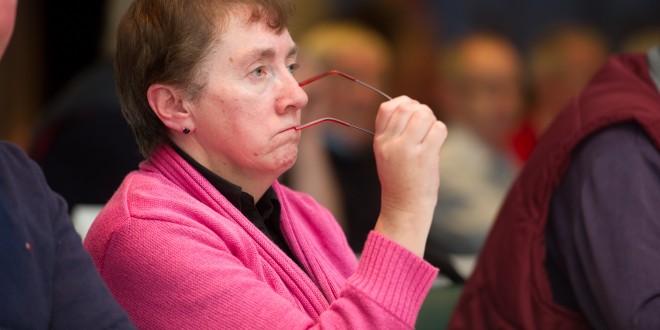 RECOGNITION for the volunteers in the GAA is how Lissycasey’s Anne Hayes describes her selection as a winner of a GAA presidential award, which will be presented  in Croke Park on this Friday evening.

The Lissycasey club secretary who is the current Irish officer with Clare GAA, will be presented with her award by association president Liam O’Neill at a function which will be shown live on TG4 at 7.30pm.

“There are many people involved in the GAA who would be more worthy of this award and I will accept it on behalf of all of them, the voluntary workers in the clubs. These are the real GAA people. They give hours and hours each week and they don’t look for recognition”, she told the Clare Champion this week.

“The GAA was something I grew up with, going to matches each Sunday and I was glad to get involved working in the background. I never saw this involvement as a chore”, she said.

Anne became Lissycasey GAA secretary for the first time in 1982, a position she filed until the end of the decade. Two years ago, in 2012, she returned to the role and is currently in her second year second time round as club secretary.

She was appointed secretary of Bord na nOg Peil in 1984 and she held the position for twenty seven years until 2011 when new guidelines meant that, all officers are now confined to a five year term of office

The Lissycasey official has been secretary of Clare scor for the past thirty years, having been elected to the post in 1984.

She has been competing in Scor si9nce 1977 and, in that time, she has won fifteen County titles in ballad group and music before going on to win two Munster titles in music.

As the club’s scor officer, she has trained many of the club’s representatives to win County, Provincial and National scor honours

She is currently in her second season as Clare GAA’s Irish officer.

She also spends a lot of time working on the administration of the club’s website and Facebook page which is a great link to the many Lissycasey people and former club members who are based in Australia, England and the US in particular.