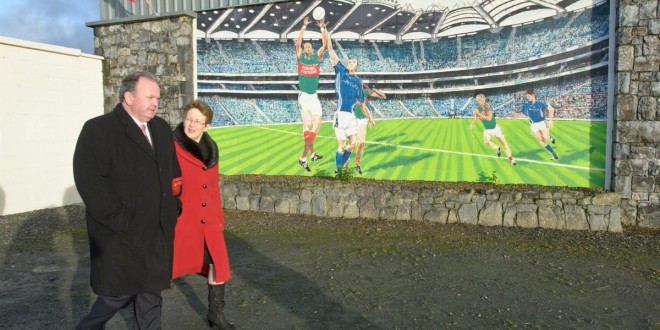 GAA President Liam O’Neill says he favours having just one player in goals for penalties in hurling, while he also defended the GAA’s deal with Sky. The media rights deal featured at the Clare GAA convention last Thursday, when Éire óg successfully proposed that when the current deal expires, games shown on Sky should also be available for viewing on non subscription channels.

“I want penalties taken from 20 metres. I have a preference for one player in goal. When a penalty is given the expectation should be a goal, favouring the attacker,” the GAA President said with reference to the ongoing penalty issue in hurling. Midway through this years championships penalty takers were forced to strike from the penalty line,” he told The Clare Champion.

“The hurling 20/20 committee, chaired by Liam Sheedy, will have a definite proposal on that. We had to act on what was happening. We couldn’t have a situation where people were endangered. It was a cause of concern that there was serious injury likely at senior level but we were more worked up about under age level where a small boy could be faced by somebody almost twice his size, firing a ball at him from that range. I think unfortunately what happened in the cricket in Australia focused people’s minds on it. Nobody wants that and as leaders of the organisation, we couldn’t continue to expose players to risk. The interesting thing is we didn’t change any rules. We actually applied the rules. It’s unthinkable in a way that you could get into trouble for applying what’s in the rulebook. I think once we did it people accepted it,” Liam O’Neill maintained.

Another current GAA issue is the possibility that All-Ireland club hurling and football finals will be played in the calendar year and not on March 17.

“We’ve undertaken to address that and we’re coming up with plans for our next Central Council meeting, just before congress, where we will discuss the issue. Hopefully we will make a decision on All-Ireland club finals being played at the end of the calendar year. Already people are pulling it down saying that it can’t be done and giving all sorts of reasons why it shouldn’t be done. The recommendations haven’t been finalised yet but because we’re so terrified of change, we attack change immediately,” Liam O’Neill said.

“What will happen is people will look at these proposals and while they might be against them first, gradually they’ll see the sense of it and hopefully they’ll support it. If we continue to run the county and club fixtures in the way we’re doing it at the moment, we’re going to get the same results. The club is being squeezed. We’re saying we have to sacrifice something at county level. At central level we’re willing to accede to the idea that the All-Ireland finals have to come forward. There has to be more space left for clubs. I think if we do that we’ll have a more defined county season and we’ll have space left for clubs to foster the games and to flourish,” he maintained, adding that any proposal will be implemented on an initial trial basis.

“We might do it for two years and see how it works out. We’re not going to throw the thing aside completely. We’ll try it out and if it works great. If it doesn’t, we always have the option of reverting. I think it will work. The demand for clubs for regular action is such that we have to look at it,” he insisted.

Meanwhile, the GAA president says that the GAA’s media rights deal was labelled the ‘Sky deal’ by RTE.

“The deal was labelled the ‘Sky deal’ by RTE which I think was an amazing marketing boob. The big story of the media rights deal was the launch of GAA GO which is in partnership with RTE. It has been such a success that we have more than doubled the amount of games available. In relation to Sky, RTE’s patch was threatened, they over reacted and I think they would acknowledge that now privately,” he said.

“GAA GO covers America, Europe and Asia. We have Channel 7 in Australia so the only part of the world we hadn’t covered was Britain. RTE never looked after Britain. It cost us a couple of games to entice Sky and I think that people have realised that the impact it has made in Britain has been fantastic. The 2013 All-Ireland hurling final and replay was talked about all over Ireland. This year our hurling final and replay were talked about all over the world. Not quite by the whole world but all over the world. I think that justifies what we did. TV is changing. We’re at the forefront of that because of GAA GO we know now what Sky can bring. If we hadn’t done the deal we’d be still wondering. The very people who are complaining about the Sky deal now would have been complaining if we didn’t do it. They would have accused us of not being brave enough to do it. We took a chance on it and we’re hugely relieved that it has worked out,” Liam O’Neill acknowledged.

On a more local level he said he was very impressed by the sequence of events in Quilty last Saturday, which concluded with the launch of the club history, edited by David Dillon.

“If ever people wanted to illustrate how central GAA clubs are to their communities, what’s happening here today is very much part of that. I’m stunned by the number of people who have turned up. It shows the strength of the GAA on the ground. We’re always worried about the future and we’re always worried about other sports overtaking us but the GAA has a grip on rural Ireland like no other sport could possibly have. We don’t say that in any boastful way. People often say that the GAA is a great community organisation. I always say that the GAA is strongest in the greatest communities,” Liam O’Neill observed.