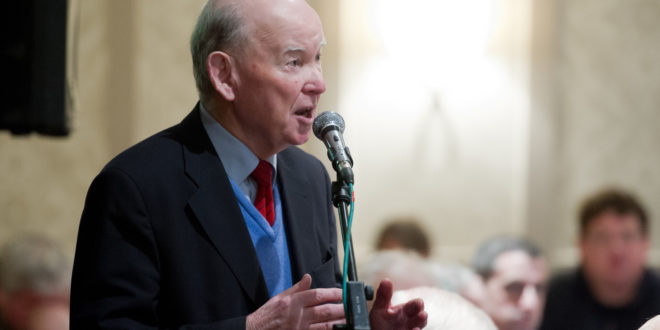 The late Noel Walsh speaking at a County GAA convention in Ennis.

THE death has occurred of one of the most influential figures in Clare GAA. Among the many achievements of retired Army Colonel Noel Walsh was securing the introduction of the open draw in the Munster Senior Football Championship, paving the way for Clare’s famous title success in 1992.

Noel served as a selector with Clare for 20 years and was part of the backroom team in 1992 when they beat Kerry in the Munster final in the Gaelic Grounds in Limerick. He was responsible for getting John Maughan on board as the team coach.

Noel also had a love of hurling and during his tenure as chairman of Munster Council, he had the honour of presenting the Munster Hurling Championship trophy in 1995 to Anthony Daly.

He won two Clare senior football championship with his native Miltown and served as club secretary and chairman. As a player he also represented Clare and minor and junior level.

The 85-year-old was a well-known administrator at county, provincial and national level and chaired a football development committee. He was ahead of his time in pushing for the provision of a floodlit venue in each province to stage evening National Football League matches during the winter.

Munster Council chairman Liam Lenihan said, “Noel made a major contribution to the GAA. He was a very genuine supporter and one of the people who made the GAA what it is, a community-based worldwide organisation that gives people a sense of pride in their own place. His example is being followed today by those helping vulnerable people in their own communities.

Clare County Board chairman Joe Cooney said, “It is with deep sadness that Clare GAA have heard of the passing of Noel Walsh. To say that Noel gave service to his club, county, province and country would be putting it mildly. He was a leading light in the county of Clare for over five decades. His beloved St Joseph’s Miltown Malbay were always in his thoughts and this also was vividly correct for his love of his county. Playing and then managing Clare for several seasons ended with the most glorious of days in 1992 when his boardroom battles for a Munster open draw ended with Clare taking Munster honours. Noel’s innovative thoughts, allied to a strong determination that the sport and equality for all was always to the fore, led him to be one of the most respected administrators in the association.