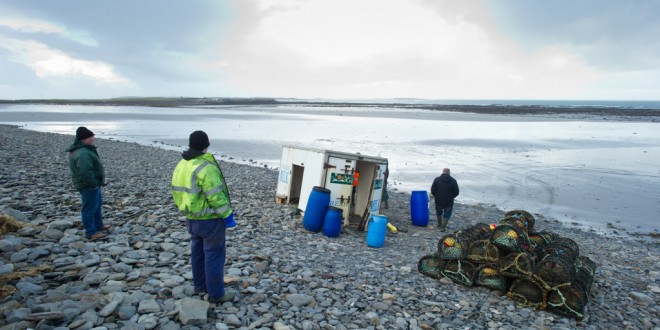 Fishermen salvaged what equipment they could from a container after it was washed off the pier at Seafield, Quilty and sent a half a mile across the beach. Photograph by John Kelly.

PUBLIC representatives in Clare are calling for Government funding to repair damage caused by last night’s storm.  Among the places along the coast to suffer most damage were Lahinch, Doolin, Quilty,  Seafield, and Carrigahol, while there was serious flooding in parts of East Clare and other inland areas.

Fine Gael Senator, Martin Conway, has said he contacted the Minister for the Environment, Community and Local Government, Phil Hogan TD, to discuss what contingency funding can be made available to repair homes and structures which were badly damaged during the storm overnight.

“Last night’s storm has devastated many parts of Clare, resulting in people being evacuated from their homes and huge parts of the county suffering from severe structural damage. I have contacted Minister Hogan in order to discuss what emergency funding can be made available to ensure that people can get back into their homes as soon as possible,” he said.
“There has been a significant amount of structural damage in many places around the county as a result of the coastal flooding in the last 24 hours. The promenade in Lahinch has been destroyed and a number of bridges around the county have been badly damaged. I am urging Minister Hogan to provide this emergency funding as a matter of urgency so that the county can recover and people can get back to their daily lives,” he added.
Clare Fine Gael TD Joe Carey said that he has contacted the Minister of State for Public Service Reform and the Office of Public Works, Brian Hayes, to raise the need for funding for areas here that have been badly hit by flooding in recent days.
Deputy Carey said that he will be making representations directly to the Minister for additional assistance.
“I have seen disturbing pictures from Lahinch this morning showing extensive damage to the promenade, retail and residential areas. I have been in touch with Minister of State Brian Hayes and am asking that the Office of Public Works would make the necessary funding available to secure the infrastructure in Lahinch, including the footpaths, sea wall, promenade and surrounding areas, retail and residential areas. I would hope that a funding application made by Clare County Council to rebuild the damaged areas would be processed swiftly by the OPW,” he said.
Share