Home » Arts & Culture » From Broadway to the Banner 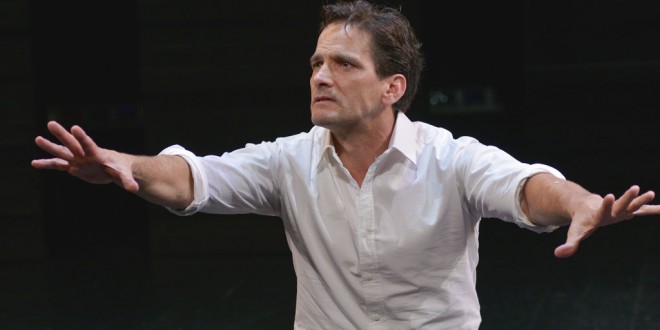 From Broadway to the Banner

PEMBERLEY Productions and the Lime Tree Theatre are bringing the one man off-Broadway production of In Acting Shakespeare on an Irish tour this month, with dates in Clare, Limerick and Galway.

The tour gives Irish audiences a rare chance to see an off-Broadway production on their doorsteps and it comes off the back of a two-month, sold-out run in New York City.

In Acting Shakespeare is a funny, touching and uplifting story of one man’s discovery of Shakespeare, acting and language.

Freely adapted, with permission, from Sir Ian McKellen’s Acting Shakespeare, James De Vita tells his own story of a young fisherman searching for a new career. This fun, fervent tribute to one man’s personal journey, deftly weaves some of Shakespeare’s most famous monologues with James’ days as a Long Island fisherman and his nights as a classical actor.

Speaking to The Clare Champion, Tim Smith, who is producing the play, which is written by and stars Wisconsin native De Vita, said he is looking forward to bringing this to an Irish audience.

“It’s a new adventure for me to be producing on my own and there is something really exciting about bringing something that you personally believe in to audiences and seeing how they react,” he said.

He explained that Sir Ian McKellen came to the US in the 1980s, with a show called Acting Shakespeare. James De Vita, who was a young man of 20 and worked on a fishing boat in Long Island at the time, went to see it.

“He came to see Ian McKellen in the show and, as a result, it changed his life and he became a professional actor and fell in love with Shakespeare. About 30 years later, he decided to do his own tribute to it and he wrote to Sir Ian and he said, ‘I’d like to do Acting Shakespeare’. In reworking the play, he realised there was no point telling McKellen’s life and so he decided to base it on his life and of going to see Sir Ian in the show and interspersing it with Shakespeare’s most famous monologues,” Tim outlined.

The play itself has a number of nuances to it and tells not only James’ life story but Shakespeare’s as well, while Shakespeare fans will get to hear famous monologues in a refreshing way.

“There is a very set script but it is like James is having a conversation with the audience. He gets up on stage and starts talking to them, it’s extraordinary. It’s very funny and also it is very touching and you see what can happen when someone sits in a theatre and discovers the power of Shakespeare’s words and how it literally changed his life and he became an actor,” he said.

James De Vita is also a published author in his own right. He hails from Wisconsin originally but his heritage goes back to County Meath. Tim said it is James’ first time coming to Ireland and so no doubt they will travel around while on tour.
“James is a great actor and I’m looking forward to working with him. The show is fantastic fun. This is the very first show I’m producing and I went to see it off-Broadway about a year ago and I sat in the theatre and I said this is just so much fun.

“He is so charismatic, it is a fantastic show. I started my career out at the Royal Shakespeare Company, so I should have a great understanding of Shakespeare but I walked out that evening and thought ‘wow’, it was amazing.

“I thought, I’m going to tour this, so I had a wonderful time trying to get in touch with him through Google and I said I would love to tour this in Ireland,” he said.
Although Tim is based in the US now, he worked with Druid in Ireland for 10 years. He approached Louise Donnellan in the Lime Tree Theatre about taking In Acting Shakespeare on tour and asked her would she like to co-produce it. She was delighted to get on board.

“Off-Broadway work so rarely tours Ireland – if ever – so that is one of the big things about the tour for me,” Tim concluded.

In Acting Shakespeare’s tour opens in the Lime Tree Theatre on this Wednesday and Thursday and continues on Friday night at  at Glór, Ennis and October 20 at Town Hall Theatre, in Galway.

Carol Byrne is a reporter at The Clare Champion newspaper reporting on news in the East Clare area and the arts. She also covers the courts in County Clare and has received seven national awards for this coverage from the Law Society of Ireland and a National Lottery Local Ireland national media award for Best Community Story 2019. A Masters in Journalism graduate of NUI Galway, she also holds a Bachelor of Arts from the University of Limerick in Music and Media Studies, and a Higher Diploma in Irish Legal Studies. She began her career interning at The Limerick Leader and Clare FM, before taking up a full time post at The Clare Champion in 2006.
@@Carlsburn
Previous Loop Head Lighthouse illuminates local tourism
Next Fire Safety Week highlights winter risks