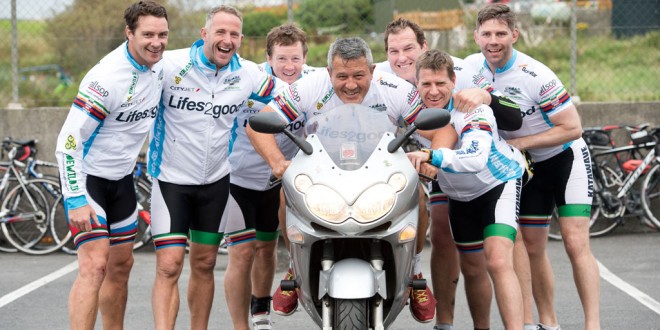 GIVEN the thousands of visitors from Limerick who decamp to Kilkee every summer, rugby talk isn’t exactly foreign to the resort town.

There was plenty of rugby speech heard beneath the soft September air earlier this week and those loosening their tongues, in advance of the Rugby World Cup, knew what they were talking about.

Former All Black number eight Zinzan Brooke, Scottish fly half Craig Chalmers and Welsh international Leigh Davies found time to project ahead to the autumn tournament, while on a brief break from the Mizen to Malin cancer fundraising cycle.

Before they got to the rugby though, these rugby men couldn’t but have the odd dig at each other, or at themselves, regarding their cycling skills.

“When you’re in the peloton and there is a big pothole coming up, you need your other team members to warn you. When you start getting to the hills, you sort of stop talking. On the flat you can get a decent conversation going,” Zinzan Brooke revealed sagely.

“Or, you fall off like me,” Leigh Davies interjected.

Brooke, who kicked one of the most famous drop goals in Rugby World Cup history in 1995, admitted that he intended to get fit for the mammoth cycle but time seemed to run out.

“I set myself a programme. Wally (Paul Wallace) asked me to take part about six or eight weeks ago. I put it in my diary that I would do two hour sessions, three times a week. I didn’t want to embarrass myself but because of work, I have done nothing. I’ve done no training for this,” he laughed, or perhaps boasted.

Brooke was after all in the middle of a 110km stage, albeit the group was stopped off in Kilkee for a few refreshments.

“Where I struggle is going uphill,” Brooke, who played Gaelic football for seven years in Auckland, eventually acknowledged, although he blamed his runners.

“It helps if you know what you’re doing with the gears as well,” Leigh Davies maintained.

Brooke went even further, admitting that cycling and talking were just not for him. It had to be one or the other.

“I’m not fit enough to talk and cycle. Some of these guys can do it but they are used to it. I can’t do that,” he said.

“So you’re not being anti-social?” Davies queried.

“Clearly, I’m anti-social,” the 58-times capped All-Black retorted, waving his pint of Guinness in the general direction of the square in Kilkee.

As for the rugby, Zinzan Brooke doesn’t think that New Zealand are under pressure to win the Webb  Ellis Trophy in Europe, having won both of their world cups in their home country.

“No, not really. If there is any team that should have won the World Cup, it’s probably France. Everybody talks about New Zealand having the monkey on their back but France have been in three finals and won none. At least we’ve been to three finals and won two,” Brooke observed.

“He deflected that brilliantly,” Davies noticed.

“I think we’ve got a good side but there are banana skins throughout the campaign. The potential is there for us to meet France in the quarter-finals, if Ireland top their group. That’s always a bit of a tender spot for Kiwis,” Brooke pointed out.

Enter into the conversation a man who had clearly thought about what he thinks is going to happen at the tournament.

“I think it’s going to be the most open Rugby World Cup that there has been,” Craig Chalmers predicted, while outside Hickey’s in Kilkee.

“Argentina beating South Africa in South Africa was a fantastic result. You can’t take anybody lightly. I hate to say it but even Scotland have started to improve. They are looking stronger in defence and the scrum seems a bit more solid. The way they are playing is a bit more ambitious. Getting guys fit is key. New Zealand suffered last time we were in Europe, losing key half-backs for that big game in Cardiff against France. I think the team that wins it will be the luckiest with injuries. New Zealand are the favourites,” he maintained.

“Wales have had some bad luck with injuries,” Davies added, referring to the loss of inspirational full-back and goal-kick specialist Leigh Halfpenny.

“I think that will be very costly for them,” Zinzan Brooke forecast.
While Ireland have lost their last two test matches, Craig Chalmers remains confident that they will deliver a huge tournament. His reasoning is linked to the identity of the Irish coach.

“You are not playing your full hand at the moment. I think Joe Schmidt has told them not to show too much. He’s too clever. He showed nothing in the last two games really. I think they have got so much more to offer,” he feels.

“They are good enough. Schmidt is a clever guy. They have enough fire power and they have some good strike weapons in the side,” Brooke insisted.

Chalmers is adamant that luck and injuries will play a pivotal role in who does what.

“It’s about small margins. Back in the 1991 World Cup, when I was playing, Gavin Hastings had a kick to put us 9-6 up against England with seven minutes to go. If he kicked the goal, in front of the sticks, we’d have won the game. World Cups aren’t always won by the best team. It’ll be an Ireland-New Zealand or an Australia-New Zealand final,” he stated, a comment that went down well in Kilkee and will go down even better across the country, if the prediction becomes a reality.