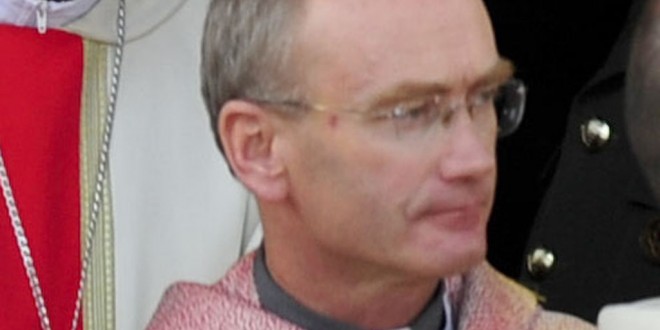 NEWLY appointed Killaloe Diocesan Administrator, Fr Des Hillery, has dismissed suggestions that he may have an interest in succeeding Bishop Kieran O’Reilly, who is now Archbishop of Cashel and Emly.

A native of Miltown Malbay, Fr Hillery has been parish priest of Nenagh for two and a half years, prior to which he served as a Columban missionary in Lima, Peru for seven years.

“We’re not going there. I’m coming back to Nenagh. We’re not going down that road,” Fr Hillery quipped when asked if he is interested in the vacancy.

“My focus is certainly here in Nenagh. It’s a very fine parish; the people are extremely good to me. I certainly enjoy where I am and I intend staying here,” he added.

The most controversial aspect of Bishop O’Reilly’s tenure was the issue over the proposed exclusion of women from the diaconate. Last September, following a number of public meetings, the then Bishop of Killaloe said he was delaying the introduction of a male-only permanent diaconate.

“Here in Nenagh, while we were aware of the discussion that was going on in Clare, we weren’t directly involved in it. There is nothing wrong with having a debate. For people who are baptised and are strongly involved in their local church, it is only right that we debate issues, have a discussion and respect each others’ views. As regards making the decision on that issue, that’s not the role of the administrator. The administrator is unable to start any new initiatives,” Fr Hillery commented, stressing that, in his view, the Church is evolving.

“What is hugely important is that each individual is given dignity and respect. How we do that as a Church is an ongoing debate. The model of church that we have today may not be the model for the future. It certainly wasn’t the model when I was growing up. If you look at West Clare, Miltown and Mullagh were the one parish up to 1838. We keep evolving and that’s the guidance of the Holy Spirit. In our baptism we are guided by the Holy Spirit and I’d say that we respect each other in whatever debate is engaged in,” he said.

Fr Hillery said his South American experience was one that had a huge impact on him.

“Before I came to Nenagh, I was in Lima with the Columbans, along with Fr Tony Casey, who is in Cooraclare now. We were in a shanty town on the outskirts of Lima. For me, it was a fantastic experience to be part of the Columban missionary work and also to learn so much from the Peruvian people, their struggle with life and how much we are inter-linked. What I also saw was the huge connection with Ireland, as a very generous country and the extraordinary amount of support that means so much on the ground. There are a few mighty women from Clare doing great work out there. There are a few from back west and they have given their life to it. They are on the street doing the every day work. I found them inspiring. They, for me, are the vision of what it’s all about. They are involved in numerous projects with women’s groups, children, education and health. Fairly basic requirements, yet they mean so much,” Fr Hillery reflected.

In relation to his current role, Fr Hillery said he was asked to fill the role of diocesan administrator until a new bishop is appointed.

“Firstly, Bishop Kieran was transferred from Killaloe to Cashel. At that stage, what happens is a group of priests in the diocese, called The Consulters, meet to select a person who will administer the diocese until such time as somebody is appointed bishop. They decided to ask me would I take it on. After a bit of thought, having consulted with a few people, prayed and reflected about it, I said I’d do it. The reason I have taken it on is there is a very good system in place and it’s a temporary appointment. It could be for a few weeks or a few months. I’ll give it as much as I can and I’ll be part of a team,” he vowed.

Fr Hillery acknowledged he has a demanding task in fulfilling his new role, along with being parish priest in Nenagh.

“Albert McDonnell and Ger Nash [diocesan secretary] are crucial to the whole thing, in that they are familiar with the work. My role is to administer as best I can from Nenagh and to make sure that the diocese is administered until such time as there is a new person appointed. I have to be sensible about it in that I’m parish priest in Nenagh. There is a whole team set up by Bishop Kieran and Bishop Willie down through the years. It’s just a matter of being part of that team. That’s the way I look at it. Any bit of help I can give, I will certainly try and do my best at it,” he said.