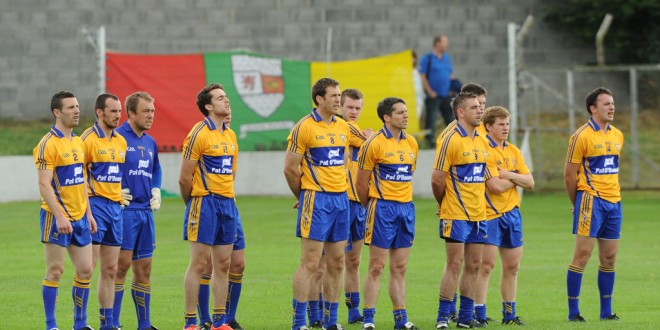 The Clare team stand for the anthem before their All-Ireland senior championship round 2B game at Dr. Cullen park. Photograph by John Kelly.

CLARE scored an emphatic 19 point win over Carlow in Dr Cullen Park on Sunday afternoon. Such was their fluency in attack, ten players contributed to their tally.

[doptg id=”31″]Clare led by 12 points, 2-15 to 1-6 at half time following a superb opening 35 minutes. Rory Donnelly scored the opening Clare goal after picking up a break off Shane Brennan who scored his sides second goal just before half time after a Shane McGrath pass.

They were dealt an early setback when Shane Hickey had to retired with a gash to his forehead which required five stitches. He was replaced by Dean Ryan at corner back.

Clare went on to dominate the second period with Podge Collins and Podge McMahon scoring their goals.

While Carlow were poor Clare will be very concerned that they conceded 2-13. With a third round qualifier looming next weekend, Clare will be severely punished if they are as porous defensively.

On an afternoon when they were supported by a sizeable Clare crowd, Gary Brennan completely dominated midfield, while Rory Donnelly, Eoin Cleary, Seán Collins and Jamie Malone played exceptionally well.