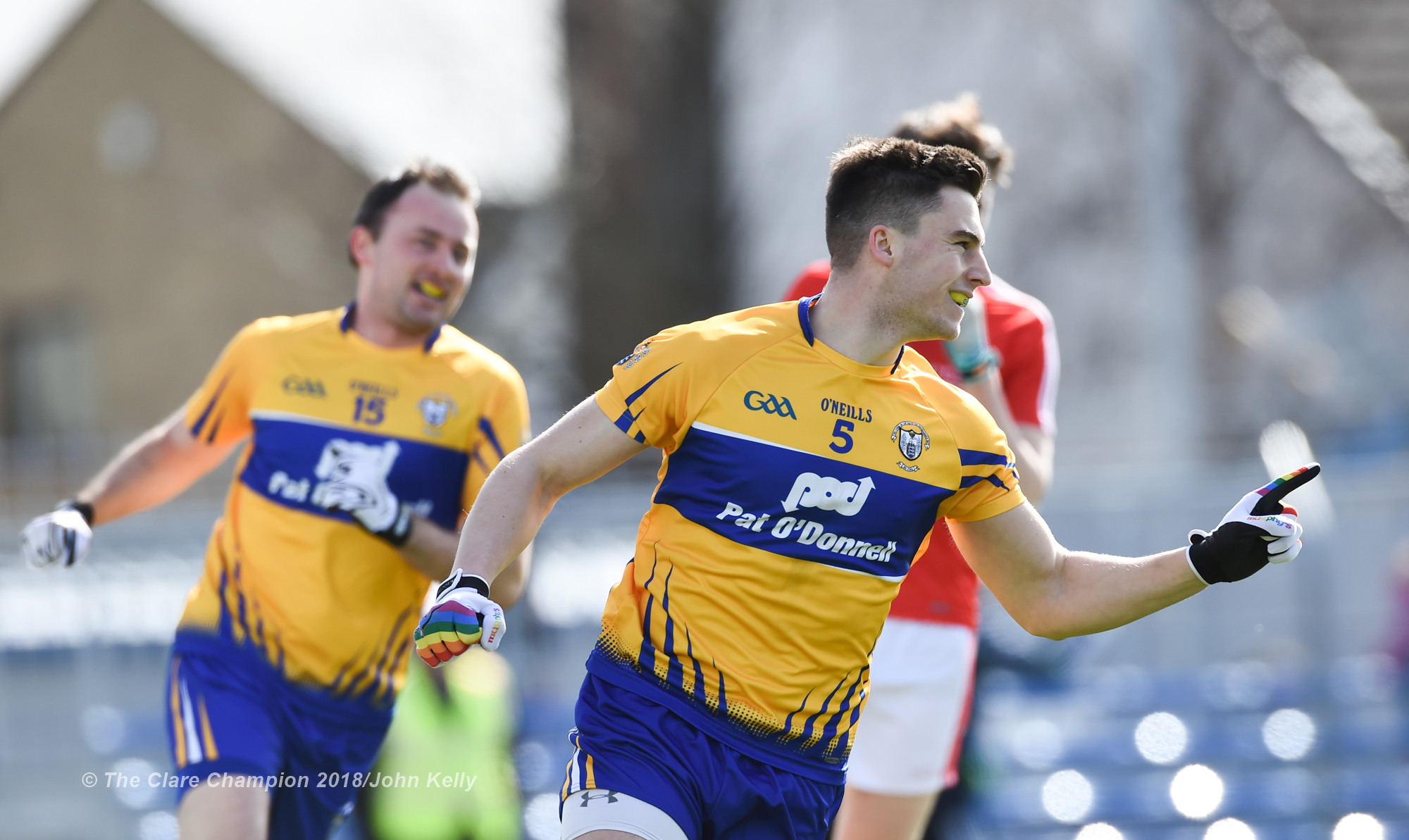 Jamie Malone of Clare celebrates his early goal against Louth during their national League game in Cusack Park. Photograph by John Kelly.

FOLLOWING their seven point win over Louth in Cusack Park on Sunday, Clare guaranteed themselves division 2 status in the 2019 national football league. In what was their first home win of the campaign, Clare were never seriously troubled by Louth who have been relegated to division three. Clare finished on eight points in the table, three more than their 2017 total. The key results in this years campaign were away to Down and Cork, while they drew at home to Cavan and Tipperary.

Goals at the start and end of the opening half were pivotal in helping Clare to a relatively comfortable win.

Jamie Malone goaled after just 11 seconds, having been put through by a Gary Brennan free. The free was won by Cathal O’Connnor who was fouled immediately after the throw in. Just before the interval whistle, Clare wing forward, Kieran Malone slotted home his first goal of the campaign, which helped the home county into a 3-7 to 0-6 half-time lead.

While Louth looked short on confidence, they could have goaled just before half-time when Ross Nally’s shot was superbly blocked by Clare corner back, Aaron Fitzgerald.

The Pete McGrath managed Wee County had their best spell immediately after half-time when Tommy Durnin scored their only goal, after sloppy Clare defending.

Andy McDonnell added a point to pull Louth within six points of the home team but that was as near as they got.

Eoin Cleary put over 0-4 of his tally in the second half while Kieran Malone was the only other Clare player to score in the second period.

Clare held out for an ultimately comfortable win, which confirms that they will play division 2 league football, for a third successive year.

On an afternoon when they did not have to produce their absolute best, Cathal O’Connor, Cian O’Dea and Seán O’Donoghue did well for Colm Collins’ team.

West Clare native Peter O'Connell has worked for The Clare Champion for 12 years and covers everything from sport, especially GAA, news, features and has been even known to branch into the fashion scene on occasion.
@@westclarepage
Previous Issue with traffic calming at Bunratty
Next Limited housing stock for sale in Clare