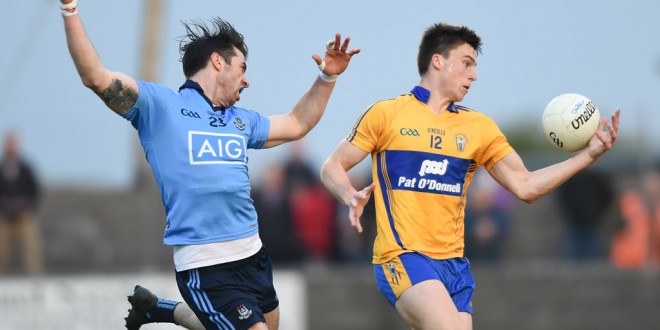 LEST any Clare supporter be unaware of the task facing the county footballers in Ennis on Saturday evening, consider that the last time the counties met in the Munster championship, Limerick won by four points, 1-13 to 1-9.
That was in 2009 and while Clare did beat Limerick in the Munster semi-final at the Gaelic Grounds three years ago, Clare hadn’t beaten their neighbours since June 3, 1984 prior to 2009.
This weekend’s game will be the 38th Munster championship meeting between the counties, with Clare winning 22 of those fixtures. Incredibly, Limerick won just a single championship game between the counties from 1909 to 1980, when they met 19 times. Five of their 37 Munster meetings have finished level.
In the here and now, the current teams met on the last Sunday of March in round six of the NFL. Limerick had to win to have a chance of retaining their Division 3 status and they did just that.
Clare’s defeat that day was their third on the spin, following losses to Tipperary and Armagh. David Tubridy didn’t feature in Newcastlewest and the Doonbeg man is almost certainly ruled out of this weekend’s game due to a long standing groin injury. To compound Clare’s attacking issues, Shane McGrath has recently undergone ankle surgery and is ruled out. Along with Pat Burke, Tubridy and McGrath were the primary scorers during the league, with the latter pointing 0-18 from play.
Clare will now have to rejig their attack somewhat. They are likely to opt to start Jamie Malone at centre or wing-forward, with Seán Collins on one wing. If Malone were to start on the wing, Podge Collins could line out at centre-forward, leaving Shane Brennan at full-forward, alongside Burke and either Eoin Cleary or Rory Donnelly. Cleary started at centre-forward against Dublin but is more dangerous in the inside line, while Donnelly’s experience and big game temperament will be a significant asset to Clare. He has only returned to the panel in recent weeks but with a glut of injuries hitting the panel, Donnelly will surely feature from the bench, if not from the start.
A fit Cathal McInerney would also be a huge asset to Clare from play and frees. However the Cratloe man only played about 10 minutes in the NFL and wasn’t introduced against Dublin. He has been carrying a leg muscle injury for several weeks.
Davy O’Halloran kicked three points from play against Dublin and must be in contention to be introduced at some point. He is an excellent play maker from centre-forward and has plenty of big game know how.
Joe Hayes will be fronted by full-back Kevin Hartnett, with Martin McMahon and Shane Hickey, who didn’t feature against Dublin, in the other corner, if fit. The half-back line will have Gordon Kelly at centre-back, with Dean Ryan and Ciaran Russell the likely wing backs. Gary Brennan and Cathal O’Connor should ensure plenty of possession around the middle, with Tom Lee detailed to mark Brennan, even if he spends some time at full-forward.
Limerick will be without league centre-back Paudie Browne, who has emigrated to Dubai. The Fr Casey’s clubman played every minute of the league for Limerick and will be a significant loss. U-21 player Cillian Fahy should fill in at centre-back, flanked by Iain Corbett and Seán O’Dea, also an U-21. The two Limerick corner-backs, Stephen Cahill and Robert Browne, will make their championship debuts, although the latter is 28. In Johnny ‘Concrete’ McCarthy at full-back, Limerick have a player of experience and steel.
Gearóid Hegatry and Tom Lee will link up at midfield for Limerick, while the half-forward line will feature converted forward Pa Ranahan at number 11, with Cian Sheehan and last year’s midfielder Darragh Tracey on the wings.
Limerick have a potent full-forward line in Peter Nash, who will make his championship debut, former Ennisymon-based garda Seánie Buckley and Ian Ryan, one of the province’s most lethal forwards when fully fit.
Limerick may opt to deploy a one or at most two-man full-forward line and utilise Tracey as a third midfielder.
The main issue for Clare will be their source of scores. With Tubridy and McGrath absent, every other attacking player will have to step up, while Clare will need Gary Brennan to put over every kickable free and a couple from play.
If players like Jamie Malone, Seán Collins, Pat Burke and Eoin Cleary get opportunities, they are well capable of taking them, as are Rory Donnelly, Cathal McInerney and Martin O’Leary when going well.
This game is likely to be very tight and, very simply, the team that gets the most from their tactical approach will win. As well as looking for forwards to take responsibility, Clare will also need to tighten up defensively. While it was just a challenge game, Dublin did walk through Clare for four goals in Miltown and they will need to make sure that Limerick don’t find their defending as accommodating.
Clare are at their best when playing attacking football at pace. If they can dictate this type of game to Limerick, they will win. However they must ensure they do not lose possession high up the field and risk being caught on the break, as happened several times during the league. When Clare have possession, players not involved must display game awareness to drop into a defensive zone. They will also be looking for some impact from the bench. Clare’s league campaign was marked by a lack of scoring threat from the 28 substitutes introduced, with only one scoring from play.
If Clare had McGrath and Tubridy fully fit and available, they would start as definite favourites. It will be much tougher without them but Clare still have enough to get over Limerick and qualify for a Munster semi-final meeting away to Cork in Pairc Uí Rinn on June 14.
Derek O’Mahony will take charge of the game, which throws in at 7pm in Cusack Park on Saturday.