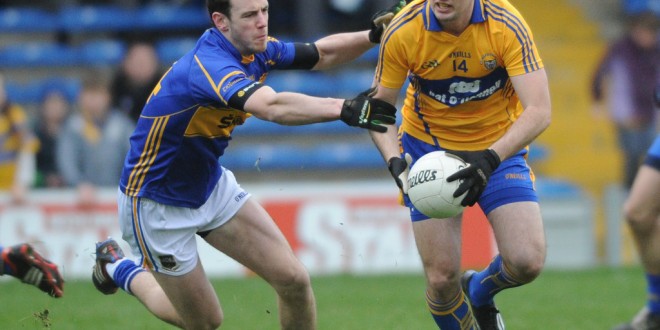 IN the aftermath of Clare’s NFL division 2 draw with Tipperary in Ennis on Sunday, the visitors manager, Liam Kearns, expressed concern at the delay in an ambulance arriving at Cusack Park to bring an injured Tipperary mentor to hospital.
Shane Stapleton was eventually removed, after a second half incident, during which he fell to the ground.
“There is an ambulance about to collect him now. It still hasn’t got here, which is disappointing,” Kearns said.
“He’s had a very bad bang to his head and we think he might have had a seizure so he’s going to hospital. Hopefully, he will be alright. It was a belt to his head. He went back and hit his head off the concrete behind him. He said to me after getting back up, ‘I don’t feel very well’. When I turned around again, he was lying on the ground in the foetal position. It is serious enough. Hopefully, he’ll be alright,” the Tipperary manager added.
In very difficult conditions, both teams made mistakes and either could have won the game. Clare had a late chance to win it but Alan Sweeney’s shot for a point dropped short.
The main talking point was the dismissal of Clare’s Jamie Malone, 11 minutes into the second half. He was red carded following an incident with a Tipperary mentor, while his team-mate, David Tubridy, was black carded for disputing the decision.
Clare also lost Eoin Cleary to a late black card, while Tipperary’s Josh Keane was sent off on a double yellow
Tipperary led 0-7 to 0-5 at half-time, following 0-5 from Conor Sweeney. However they lost full foraward, Michael Quinlivan to bruised ribs, in that half.
Keelan Sexton kicked two of Clare’s first half points from play, the second following a superb Gordon Kelly run.
Clare emerged energised after the interval and points from Malone and Pearse Lillis pulled them level, 0-7 each.
Scores from Bill Maher and Jimmy Feehan restored Tipperary to restore their advantage as they held on to their unbeaten league record against Clare who haven’t beaten Tipperary since 1992.
Five minutes from time, Sweeney’s seventh point left Tipperary 0-12 to 0-11 up but Sexton equalised from a 40 metre free. Clare could have won it but they now stand on two points from their opening three games. Their next fixture is away to Down on Sunday February 25.

West Clare native Peter O'Connell has worked for The Clare Champion for 12 years and covers everything from sport, especially GAA, news, features and has been even known to branch into the fashion scene on occasion.
@@westclarepage
Previous €600b spend forecast for EU consumers in 2018
Next New jobs for Shannon