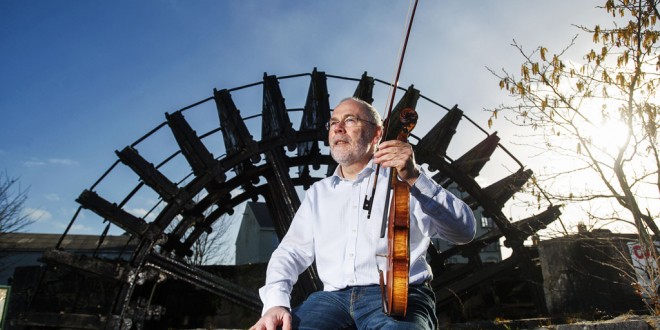 Mícheal Ó Riabhaigh, of The Fleadh Down In Ennis group . Photograph by John Kelly.

Clare Comhaltas is expecting it will cost between €800,000 and €850,000 to run Fleadh Cheoil na hÉireann 2016, Fleadh could cost €850,000pending official confirmation of the official budget.

They are hopeful that Clare County Council will contribute about €60,000, based on its proposed financial contribution, which was contained in previous bids, subject to the approval of councilors.

An emphasis on innovation was also a key factor in the success of the application. One key proposal is a commitment to staging the first ever ‘Totally Accessible Fleadh’, so that people with disabilities will be able to participate fully in all events including competitions, concerts and classes.

In addition, the iFleadh will make the most of new media and social networking technology to enhance the festival-going experience. Although Fleadh Cheoil na hÉireann 2016 will be centered in Ennis, it will also create an ideal opportunity to showcase all that the county has to offer.

The Sharing Clare initiative, contained in the bid, proposes a county-wide programme of events such as sessions, set-dancing, talks and guided tours, which will introduce visitors to the best of everything which the Banner County has to offer.

Over the coming weeks, people with expertise in various sectors such as accommodation, public relations and marketing, hospitality, local government and other areas will be appointed to a new 2016 Fleadh Executive Committee.
It is expected this committee will comprise between 20 and 25 people, who will have the arduous task of planning and managing the world’s biggest Irish traditional music festival from August 14 to 21 next year.

The successful outcome was the culmination of a campaign initiated in July 2010 by a broadly based working group, tasked with preparing and presenting the bid to bring Fleadh Cheoil na hÉireann to the county town.

After the result was announced, a delighted Mr Ó Riabhaigh (pictured) remarked that while hosting Fleadh Cheoil na hÉireann in any year would be highly prestigious, being entrusted with the festival in the centenary year of the 1916 Rising is a privilege for the people of Ennis and County Clare.

He expressed his deepest gratitude to the Ardchomhairle for investing their trust and confidence in the bid from the Abbey branch.

Mr Ó Riabhaigh acknowledged the Comhaltas organisation in Clare and the Munster Council for their support and efforts on behalf of the Abbey branch, without which a different outcome may well have prevailed.

He also paid tribute to the dedication and professionalism of the members of the working group and said that Saturday’s result was testament to their hard work and attention to detail on every aspect of the proposal.

“I am confident that the 2016 Fleadh will be a fitting celebration of Clare’s rich musical and culture heritage.

“Comhaltas Ceoltóirí Éireann (CCE) was founded in 1951 and the Abbey branch in Clare was founded within a year of the national organisation. Clare has had a long association and history of promoting CCE,” he said.

He pointed to the unique streetscape in Ennis with its narrow streets and laneways, which he said will add to the overall ambiance during the festival.
He also noted that local CCE members had hoped that the late Spancilhill singer-songwriter, Robbie McMahon would have lived to see the Fleadh return to Ennis.

Describing Mr Mahon as an “inspirational character”, he said his song The Fleadh Down in Ennis was like a documentary of people who attended the 1956 Fleadh.
He noted others, like the late Brian Prior, who published two books for Comhaltas, worked extremely hard making Irish traditional music more accessible to everyone.

Mr Ó Riabhaigh, who plays the uileann pipes and fiddle, has been involved in the promotion of the Abbey branch for the last 10 years.

Ennis has hosted the festival on two previous occasions in 1956 and 1977. Since it last came to the town, Fleadh Cheoil na hÉireann has grown into the greatest celebration of traditional music, song and dance anywhere in the world.

Ennis too has changed in that time and major improvements in areas such as transport, accommodation and venues undoubtedly played a significant part in the decision to award the festival to the town.