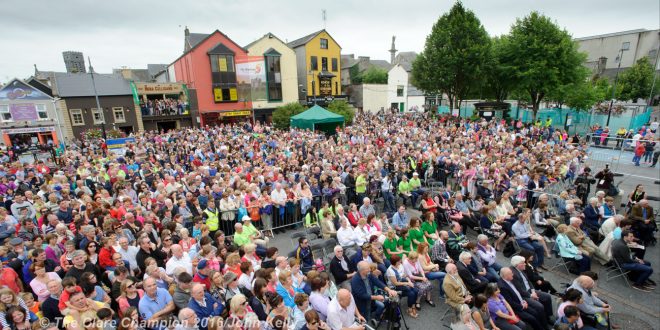 Some of the crowd in attendance at the official opening of Fleadh Cheoil na hEireann in Ennis. Photograph by John Kelly.

Fleadh Cheoil na hÉireann was officially launched on Sunday afternoon to throngs of people who gathered in the county town to celebrate this momentus occasion.

Crowds lined the streets as the festivities began with a parade through the town centre. Ennis came alive with the sound of music, as groups found spots to set up and play awaiting the arrival of President Michael D Higgins.

Special tribute was paid to the late Clare singer, Robbie McMahon whose song, The Fleadh Down in Ennis, has been rolled out once again in celebration of the talent that has descended on Ennis for the 2016 All Ireland Fleadh.

Addressing the masses in Abbey Street Car Park, and those onlooking from balconies and windows overhead President Higgins, paid tribute to Robbie and this iconic song quoting, “They came from the North and they came from the East from the West and the South ‘twas a thriller to see”.

Robbie was also mentioned in the opening address by Comhaltas Director General Labhrás Ó Murchú as was Brian Prior. He said they would be two people who will be sadly missed at this year’s Fleadh.

President Higgins said it was particularly special that this year’s Fleadh would be held in County Clare, which is so renowned for its wonderful living musical heritage. He listed off a number of musicians who had helped cultivate this tradition, among them Mrs Crotty and Willie Clancy, as well as those Clare musicians who have continued to spread the tradition at home and abroad including Martin Hayes, Sharon Shannon and Noel Hill, to name a few.

With over 6,000 competitors participating  in 180 competitions and 28 concerts scheduled  over the course of the next nine days it promises to be one to remember.

Carol Byrne is a reporter at The Clare Champion newspaper reporting on news in the East Clare area and the arts. She also covers the courts in County Clare and has received seven national awards for this coverage from the Law Society of Ireland and a National Lottery Local Ireland national media award for Best Community Story 2019. A Masters in Journalism graduate of NUI Galway, she also holds a Bachelor of Arts from the University of Limerick in Music and Media Studies, and a Higher Diploma in Irish Legal Studies. She began her career interning at The Limerick Leader and Clare FM, before taking up a full time post at The Clare Champion in 2006.
@@Carlsburn
Previous Eoin Shares his passion for music
Next Leaving Cert exam helpline