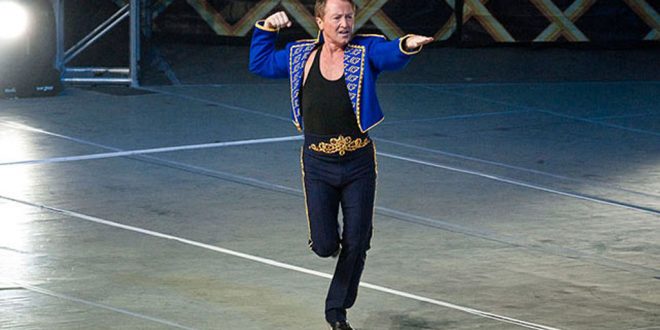 Michael Flatley who was conferred with an honorary degree by the University of Limerick.

MICHAEL Flatley was not paid for his role in the opening ceremony of Fleadh Cheoil na hÉireann in Ennis.

Rumours had circulated that thousands of euro changed hands but Frank Whelan, chairman of the Fleadh Cheoil Committee, said this was not the case.

“We were graced by Michael Flatley, who agreed to do it for us. I think there were rumours going around but he did this on a voluntary basis for us. There was no question of payment.”

While a figure of 450,000 people attending the Fleadh has been reported, he said it was likely to have been slightly higher.

As the Fleadh reached its zenith on Saturday, there were around 100,000 people in attendance. This was the largest crowd seen on one day in either of the two years the event was in Ennis but Mr Whelan said the numbers were well catered for.

“The gardaí brought in crowd management on the Saturday night, which would have been the first time they had to do that. We were prepared for that last year but there wasn’t any need but on Saturday last, they had to control people coming into Parnell Street and O’Connell Street, just for a couple of hours and it eased off then. That worked extremely well. There were no major incidents,” he said.

With the experience of 2016 behind the organisers, Mr Whelan said the adjustments made for 2017 were successful.

“I think the traffic management worked very well this time. We took on board suggestions that were made after last year and it was just so much freer. Normal business was conducted through the week until the weekend, when traffic restrictions had to be put in place,” Mr Whelan continued.
The weather was far better this year but this wasn’t the only factor behind the greater crowds, he believes.

For a short time after the Fleadh ended, there were widespread rumours that the 2018 event would not be held in Drogheda as planned, with speculation Ennis could have a third year. Mr Whelan said there had been no basis for this but he had an idea of how it might have started.

“From our own investigations, I think what happened was an announcement was made off the Gig Rig and it must have been quite noisy at the time, or people weren’t listening, but whoever was speaking was explaining that the Munster Fleadh was coming to Ennis next year. I think all people heard was ‘the Fleadh’. There was no truth in those rumours, it’s on its way to Drogheda.”

While the Fleadh is unlikely to return to Clare for years to come, Mr Whelan said he would like to see the successes of last week built on in some form.

It is hard to see what other single event you could bring into Ennis that would equal that. I would hope people would come up with some good ideas that will at least bring some event in, or maybe bolster up or increase the events that are on in Ennis over the course of the year.”