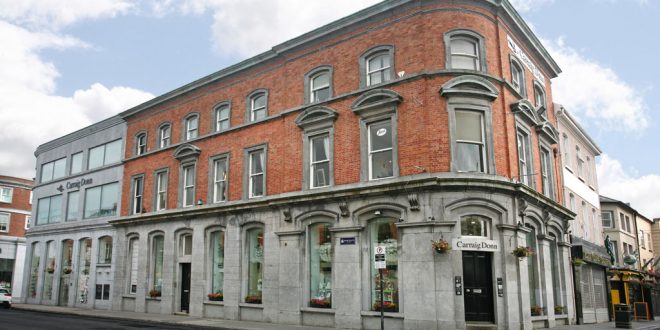 The Carraig Donn building on O'Connell Square is on the market for €2.25m

A LANDMARK building in the heart of Ennis has come onto the market, with a price tag of €2.25 million.

The flagship store in the Carraig Donn Group on O’Connell Square has been put up for sale as a retail investment, with the existing occupier’s lease running until 2026. The tenant is not affected by the sale.

Paddy Darmody of selling agents, Sherry FitzGerald McMahon, Ennis, is expecting a lot of interest in the property.

“It’s a landmark building, with a tenant who has 38 other shops in the country, with plans to open three more this year and a strong online presence. With a current annual rental income of €155,000, the sale of this property offers the superb opportunity of acquiring a prime, easily managed retail investment, at a time when returns from cash and other investment vehicles are at an all-time low,” he said.

Mr Darmody pointed out that the building is situated in a prime location in the retail heart of the town.

“Ennis is the sixth largest town in Ireland, with a population, including environs, of in the region of 30,000 and an average daily footfall in the town centre of 11,000. Ennis will host Fleadh Cheoil na hÉireann in 2016 and 2017, attracting over 400,000 visitors from around the world. The Carraig Donn store is located in O’Connell Square, the retail heart of the town, with nearby occupiers including many well-known names and strong local retailers.”

The premises is four storeys over a basement, with a gross internal area of 995m2, occupying a former Bank of Ireland branch with an architect-designed, contemporary extension.

Mr Darmody added that there has been a marked increase in businesses opening in prime locations in the town.