Home » Sports » Fixtures fiasco drags on and on 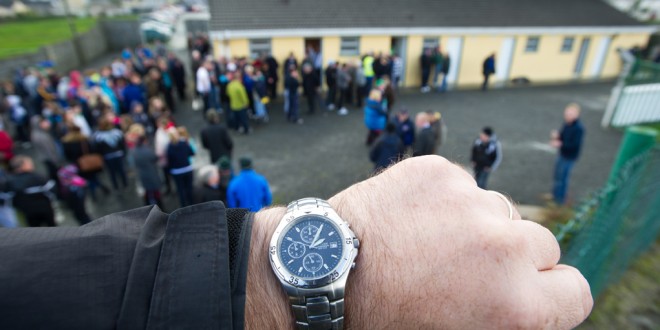 Time is ticking for the conclusion of the Senior Football Championship as a fixtures headache mounts.

Fixtures fiasco drags on and on

THE Clare County Board’s protracted efforts to re-fix the Cooraclare v Doonbeg senior football championship quarter-final had, at the time of going to press on Wednesday evening, failed to find a solution.

The game was due to be played last Monday at 2pm in Kilmihil but Cooraclare did not field as one of their players, Enda Considine, father’s funeral mass was at 12noon in Cree on the same day.

Had the game gone ahead, it would have been Cooraclare’s third senior football championship match in eight days. They had to wait 78 days between their first and second-round fixtures.

Once it became clear that Doonbeg were not about to accept a walkover or hand over a signed team sheet to match referee Michael Talty, the football championship timetable was thrown into chaos.

Had Doonbeg submitted a team sheet to the match official, it is likely that the county board would have awarded the game to the Magpies and, in their view, cle

ared the way for a semi-final meeting with Lissycasey on Saturday.

However, Doonbeg made it crystal clear that they were not prepared to accept a walkover from their neighbours, under any circumstances.

County board chairman, Michael McDonagh did not want to elaborate on the talks that have taken place since Tuesday. “We are trying to resolve the situation and we hope to do so as soon as we can,” was all he was prepared to say on the fixtures wrangle.

The five clubs remaining in the senior football championship, Doonbeg, Cooraclare, Éire Óg, Cratloe and Lissycasey, met separately with county board representatives on Tuesday in a bid to find common ground.

Throughout the course of the week, several options were examined, including the option of playing the county football final on Saturday, November 16, which would mean that the Clare champions would have to play their Munster club semi-final, against Drom-Broadford or Ballinacourty, the following day.

Other options looked at included playing the outstanding quarter-final midweek, with the winners then free to play Lissycasey on Saturday in the first of the football semi-finals.

However, Doonbeg have a UK-based player in Shane O’Brien, who, along with Ronan Goode, plays hurling for Newmarket. To complicate matters, Newmarket play Ballyea in Sunday’s senior hurling semi-final.

The county hurling champions are unlikely to be agreeable that the duo play a football championship match the day before that semi-final. Another complicating factor is that Cathal Doohan plays football with Lissycasey and hurling with Ballyea.

The embarrassing fixtures fiasco comes just two weeks after the Clare County Board initially decided that Kilmaley should partake in a senior hurling relegation play-off with Clarecastle and St Joseph’s Doora-Barefield. It was only when Kilmaley pointed out that they had a superior scoring difference to Tulla that they were exempt from the three-way relegation play-off.

West Clare native Peter O'Connell has worked for The Clare Champion for 12 years and covers everything from sport, especially GAA, news, features and has been even known to branch into the fashion scene on occasion.
@@westclarepage
Previous Zurich fixed in Sean’s Sights
Next Champion making headlines on mental health