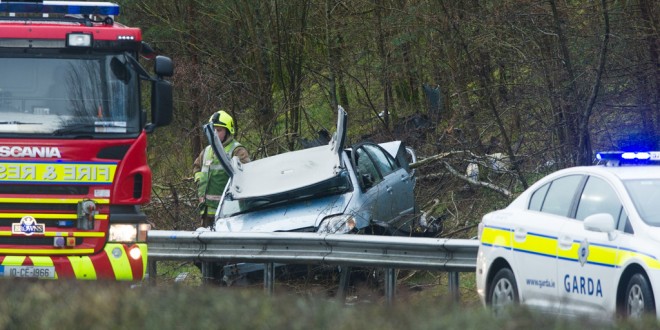 The scene at Newmarket On Fergus on the North bound lane of the M18 on Thursday morning when five cars crashed in separate incidents, within ten minutes. Photograph by John Kelly.

Five Cars Crash on M18 at Newmarket on Fergus

GARDAí, six units of the fire brigade, and two ambulances were called to five separate car crashes, which occurred during a ten minute window on Thursday morning on the M18.

Gardaí at the scene outlined that all three occurred separately within a ten minute period around 8.30am and all during a “freak” “downpour of hailstones”.

One of the cars lost control and hit the central median and was a write off. There was one person in this vehicle. A further car, also on the northbound lane left the road further up from this location and struck the crash barrier. There were two females in this car that had to be cut out of the vehicle. According to gardaí, a  further car that tried to avoid the accident spun around. The driver in this car was shook up, but wasn’t taken to hospital.

On the southbound lane of the motorway, two separate cars also crashed during the same period and one person was taken to hospital.

Gardaí advised that during such heavy rain or hail, motorists should take precautionary measures and slow down.
The motorway was closed for a technical examination and to safely remove the cars and those involved in the incident. It re-opened approximately an hour and forty five minutes later.