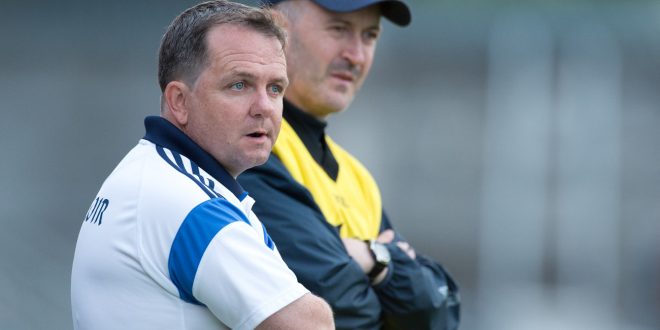 DAVY Fitzgerald is expected to continue as manager of the Clare senior hurling team for another year.

After a four-month break, Clare GAA will hold a county board meeting next Tuesday at their meeting room in Caherlohan where, it is expected, a number of inter-county team managements for the coming season will be appointed.

Whether or not Fitzgerald would seek another term in charge of the senior hurlers has been a topic of discussion since the team bowed out of the championship in July.

Fitzgerald, who spent some time in hospital in the lead-up to Clare’s game with Galway, has said on a number of occasions since then that he will take time to decide on his future.
He did attend a number of the club championship games last weekend, as did selectors Louis Mulqueen and Michael Browne. The expectation is that he will seek to continue as team manager.

After leading Clare to the All-Ireland title in 2013 in his second year in charge, he still had a year left in his initial appointment of three years.
At the October meeting of the board in 2013, he was unanimously given a further three-year term on the proposition of the then chairman Michael McDonagh and the third year of that term still has to run.

Paul Kinnerk stepped down at the end of the 2014 campaign but returned last season, shortly before former Cork player Donal Óg Cusack was added to the team by Fitzgerald. Kinnerk is believed to have given a commitment for just one year at the time. His name is being widely linked with a role with his native Limerick, where he is currently in charge of the county’s underage football squads.

It is likely that Fitzgerald will want to keep Cusack as part of his management team.

In the unlikely event of Fitzgerald stepping down from the manager’s job, U-21 boss Donal Moloney is seen as an obvious front-runner for the position. Assuming Fitzgerald is to continue, then it’s expected that Moloney will be asked to continue as U-21 manager.

Meanwhile, it is expected that football manager Colm Collins will be asked to run for another term but at the time of writing, a meeting between the Cratloe official and the board executive had yet to take place. It’s thought likely that that meeting will go ahead this week.

Two people are in the running for the minor hurling manager’s position. Sean Chaplin from Sixmilebridge, who is Clare GAA’s games development manager, and Sean Doyle from Bodyke are seeking to succeed Kenny Morrissey.

It remains to be seen if the executive, who are believed to be divided as to who should be appointed, will be in a position to make a recommendation to next Tuesday’s meeting on the appointment.

Both Chaplin and Doyle have been interviewed by a sub-committee of the executive, which was set up to meet candidates for the position.

Seamus Clancy (Corofin), Clare’s only All-Star football award winner, is set to be named as the county’s new minor football manager. He will head up a team that will include Eamonn Keane (Shannon Gaels), Shane Flanagan (Éire Óg), Liam Conneely (Clooney-Quin) and Michael Rouine (Ennistymon).

Kilkee’s Michael O’Shea, who was joint manager with Neil Hawes in the outgoing U-21 football management team, is understood to have informed the executive that he will not be continuing.

Hawes and fellow outgoing selectors Martin Brennan and Donal Ó hAinifein are expected to be appointed for the coming year.