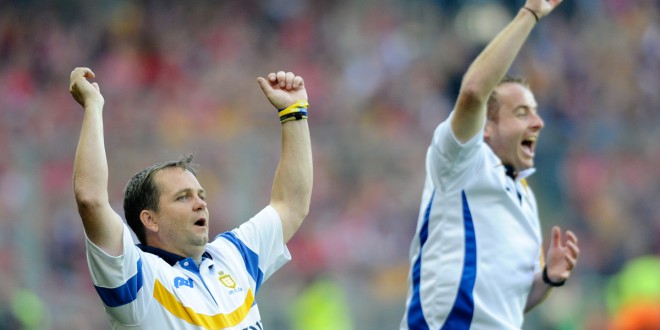 WHILE the Banner’s tactics have drawn a share of criticism over the last two years Davy Fitzgerald has been vindicated now yet when he spoke to the media on Saturday evening he strove to keep the focus on the players.

He said he was particularly pleased with the spirit shown when it looked like they had squandered a significant first half lead. “We played probably the best 20 minutes I’ve ever seen at the start, we were on fire. Naturally you’re not going to keep going at that pace. The biggest test of a Clare team I’ve ever seen was when they brought it back to zero again. Everything was going against us, but it’s not down to anyone else, these boys have incredible resilience. It didn’t come from anyone training them, it comes from themselves, they are good kids, they are honest kids, they never give up. They are fellas who mind themselves unbelievably and I think it showed out there today. I’m just so proud of them and the way they handled themselves. They are so young and in the heat of battle we lost a nine point lead. They hit us with everything they had and we still came back for more and finished it in style.”

The performance of Shane O’Donnell was the story of this All Ireland and he joked that he’d asked the Éire Óg man for one more goal. “I asked him for four! And he was very close to getting it! Shane O’Donnell in training for the last two weeks has been incredible.”

To protect O’Donnell, the Clare management didn’t let him know he’d be starting until late on. “I only told him at ten to three so he didn’t have much time to worry about it. I rang him over the last few days and told him he’d probably come on at some stage, but we decided to keep him from him. Probably every one else in the county knew it!”

He also paid tribute to Darach Honan, who he said hasn’t been operating at 100% throughout the championship. “Let me make this clear Darach Honan has been carrying an injury for three months that nobody has known about. He has a 16cm tear in his quad muscle for three months, he has only been training once a week for three months, how he has done what he has done is incredible. We decided he wasn’t getting enough training done and we’d be doing well to get 15 or 20 minutes out of him and what a display he gave when he came on, he got the goal that clinched it for us at the end and I’m very proud of him.”

The form Clare showed in training since the replay was spectacular, he added. “We played a match last Friday night, the As versus Bs and I never saw anything like it. In 21 minutes we had eight goals and nine points scored and we had to stop it, thats fact. We were thinking, it’s a week too early, we’re going too well. We were absolutely flying it.”

Previous Conlon reflects on a dream come true
Next 30,000 gather in Ennis for Banner homecoming