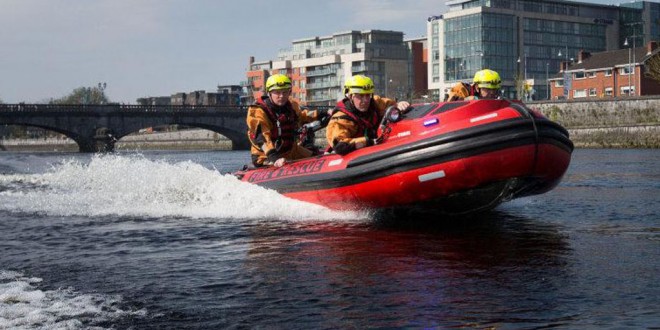 Fireswift skims along the water in Limerick.

Fireswift takes to the River Shannon

FIRESWIFT, a new custom made power boat specifically designed for use on the River Shannon has been formally launched by Limerick Fire and Rescue Service.

Mayor of Limerick City and County, Kevin Sheahan, officially launched the powerful 4.6m RIB at the pontoon in Steamboat Quay, Limerick. The 4.6m RIB can be launched in less than a minute, as it is permanently moored on a floating pontoon.

The fastest emergency response on the river, FIRESWIFT can be mobilised within three minutes from the time an emergency call is made and will be used by the Fire Service in conjunction with inflatable rescue sleds.

More than 160 children had taken part in a competition to name the boat, with successful entrant Ellie Mae Rooney (11) a fifth class pupil from the Salesian primary school receiving an iPad, sponsored by local company Amber Fire.

Mayor Kevin Sheahan said, “It is a pleasure to launch such a service, which is one of only two boats of this type in use by fire brigades in the country, the other being utilised in Dublin on the River Liffey.

“I am delighted that it is available for Limerick Fire and Rescue Service which is now fully equipped for river rescues. A total of 37 such rescues took place last year and with 12 already in 2015, I know that this is a craft which is going to be in demand. I would like to wish the teams that operate FIRESWIFT a safe, swift and successful passage with each use.”

Chief Fire Officer Michael Ryan said, “The multiple skillset of our highly trained firefighters means that we are now well placed to respond to a variety of incidents, including fires and rescues.”

“Interestingly and importantly for river rescues, the boat uses a water jet outboard so it does not have a propeller which reduces the risk for those involved in rescue operations. Its modern design and spec is a source of confidence for everyone who uses it. I want to express my appreciation to Inland Inflatable Services Ltd. in Sligo who worked with us to design a boat which caters for the unique characteristics of the River Shannon.”