Home » News » Finding the heart of the Burren Lowlands 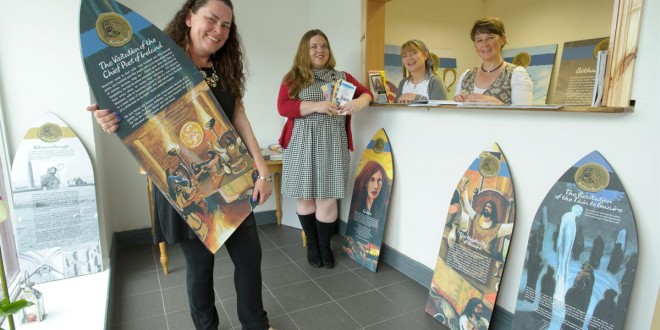 The new Gort Tourist Office was opened on June 13, 2014 by the local voluntary Burren Lowlands group.

Finding the heart of the Burren Lowlands

THE Burren Lowlands initiative saw its first major victory on Friday when a new tourism office was opened in Gort.

In January, a small group of people living and working in Gort and its hinterland got together to stimulate job creation, rural and urban rejuvenation in the area, sustainable tourism and greater appreciation of arts and heritage. Two hundred people turned out when they held a public meeting in the Lady Gregory Hotel in April, aimed at getting ideas and input from the wider community and reversing the decline that has seen the town become one of the worst hit in the country in terms of the recession.
At that meeting, ideas were put forward as to how this ambitious transformation could be achieved.

“This really started at that meeting,” said local man and Galway County Councillor, Gerry Finnerty, one of those behind the Burren Lowlands project.

“People said they felt there should be a tourist office in the town because there are so many things in the area but people aren’t hearing about them and if they are, they can’t find them. It was a recurring suggestion from the tables at that meeting. Everyone wanted to see a tourist office in the town and Mike Mullins offered the office space and it has moved on from there. It is being manned by Tús workers and volunteers. The signage and painting was all voluntary and the materials donated. The use of the premises was donated, basically all we had to do was come up with the insurance, which we have done,” he explained.

“People in Gort and the surrounding areas want to see the Burren Lowlands marketed and signage is needed for that. It doesn’t reflect well on Galway County Council but the signage around our area is quite poor, especially considering there are so many tourist attractions here. A tourist could be standing in the centre of town and not know where to go. They are lost. There was a need for someone to be there who could explain to them where everything is, how to get to Kilmacduagh, to the Burren, to the Lady Gregory Yeats Heritage Trail. We have missed out on the Wild Atlantic Way, it took a detour north of Gort but that doesn’t mean we have to miss out on tourism,” he added.

According to Councillor Finnerty, this project and others which are in train, show what people can do for themselves.
“We have to market the town ourselves and the community is strong enough to do that,” he believes.

“Certainly looking at the Wild Atlantic Way, there has not been enough thought put into it. It brings people as close to the sea as possible but people haven’t thought about where are these people going to eat, where will they stay. Gort can be part of an alternative route. You don’t have to turn off at Kilcolgan, you can still come to Gort where we have a selection of services and then go to Kinvara on a different route,” Councillor Finnerty outlined.

The group behind the tourist office hope to have it open 9am to 5pm seven days per week.

“If the first few days are anything to go by, this will be a success. There have been lots of visitors coming in, people identifying the different countries they come from and there are lots of people volunteering too so we hope this will continue and generate additional tourists for the town, people will stay a bit longer and see what the area has to offer,” he concluded.