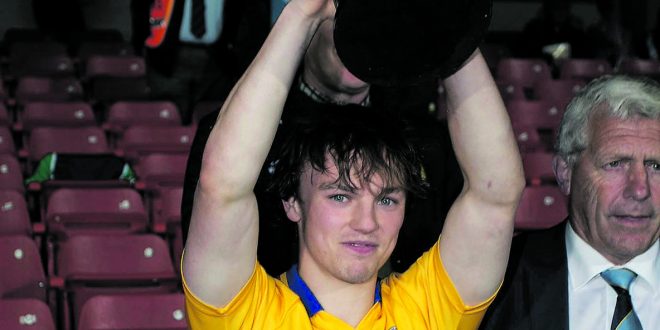 History was made at Cusack Park this Good Friday evening as Feakle-Killanena won the county under 21 A championship title for the first time in the club’s history while Corofin captured their first ever title at this level when they were victorious in the C final.

In both cases the defending champions were defeated, Inagh-Kilnamona in the A and Scariff in the C in a double bill that attracted an attendance of 1, 526.

Feakle-Killanena showed the greater hunger for success over the sixty minutes in an A final that never really reached the heights expected. Overall, the East Clare combination were better and deserved their narrow win on an evening when they managed to limit the contribution of Inagh-Kilnamona’s key players.

Things didn’t look good for the new champions at the half way point when they trailed by a point having played against the wind. A goal from David Mescall in the twenty first minute helped the defending champions to lead at the interval on a scoreline of 1-7 to 0-9. they accounted for six wides in that half which proved costly on the day.

Things headed up in the second half and referee Damian Fox produced a number of yellow cards. Each side added a point to their tallies in the opening ten minutes of the new half before Feakle-Killanena took control in the middle period of the half, shooting 0-4 without reply, three from the stick of Fiachra Donnellan, to lead by three with just under ten minutes remaining.

Like scores from David Mescall and a David Fitzgerald long range free cut the margin to the minimum with seven minutes still to play and a minute later Inagh-Kilnamona followers were celebrating but it was only for a moment. Full forward Evan McNamara added to a David Fitzgerald free but the goal was disallowed for a square infringement. The winners replied with points from Steven Conway and Donnellan to leave three between them as the game went into four minutes of ‘added time’.

In the third of those added minutes David Fitzgerald, now operating at full forward, stepped up to a 20m free but his effort for goal was saved on the line and seconds later Feakle-Killanena were celebrating a first ever success at this level.

An all round stronger Corofin outfit dominated from the start to deservingly win their first ever title at this level when they proved too s trong for Scariff in the opening tie at Cusack Park this evening.

They led from the outside and were six points clear at half time when the score was 1-9 to 1-3, their goal coming from Mikey Kelly who was the game’s top scorer with 1-5 to his credit.

Having played with the aid of the breeze in the first half, Corofin supporters were a little concerned facing into the second period but their fears were quickly eased as the North Clare side took control and goals from a Fergus Killeen penalty and from Gearoid Cahill early in the final quarter sealed victory.

GAA chairman Joe Cooney presented the cup to the winning captain Fergus Killeen who was forced out of the contest in the final ten minutes with an ankle injury.