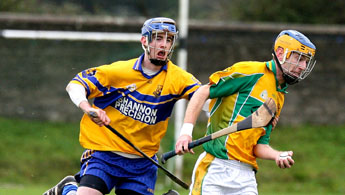 Feakle's Cillian Bane gets away from Sixmilebridge's Darragh O'Connor during their Intermediate game at Tulla on Saturday. Pic Arthur Ellis.

Feakle will play Whitegate in the final of the Clare Intermediate Hurling Championship following their five-point victory over Sixmilebridge at Dr Daly Park in Tulla on Saturday afternoon.

Two goals from Gary Guilfoyle played a key part in this success and clears the way for next Saturday’s final. There will be no rest for the winners of that game as, 24 hours later, they will be in Munster club action against either the Cork or Waterford champions.

Tulla have secured their senior status for 2014, thanks to a five point win over St Joseph’s at Cratloe on Saturday. The Doora-Barefield club has one more chance to stay at the top level. They play Clarecastle on Saturday next and the losers will drop to Senior B for 2014.

The minor A hurling final will be a repeat of last year’s decider with holders Kilmaley taking on Clarecastle. The Magpies sealed their final spot when they overcame Inagh-Kilnamona, 0-16 to 0-12, at Shannon on Saturday.

After a number of years without an adult team due to declining numbers, Killimer affiliated a junior football team in 2012 and 12 months on they are preparing to convest the Clare Junior B Championship final. At Cooraclare on Saturday they scored a five-point (0-8 to 0-3) win over their neighbours Shannon Gaels to set up a final date with Moy on Sunday next.

Killanena and Ennistymon will have to meet again after they played a 0-13 each draw in the intermediate hurling championship relegation play-off at Ruan on Saturday.