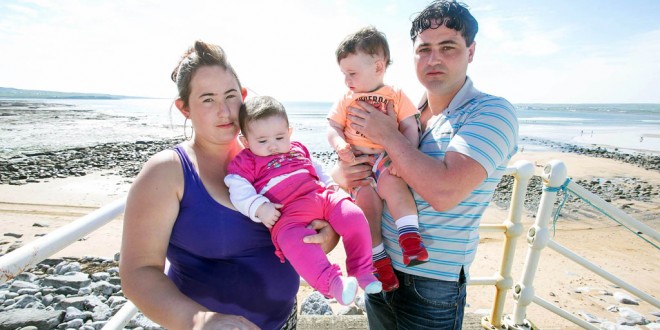 220415 Martin Mongans with his partner Kathleen Delaney and their 2 kids Martin jnr (17 months) and Kathleen (5 months) passing the hours away on the prom in Lahinch because they are currently living in a B&B.Pic Arthur Ellis.

A homeless family, living in emergency accommodation for the past three and a half months, is begging Clare County Council to house them, as they cannot find suitable private, rental accommodation locally.
Martin Mongan, his 21-year-old partner, Kathleen Delaney, and their two young children are currently living in one bedroom in a bed and breakfast in Lahinch.

“It has been very, very hard. There is a lot of moving. Where we are now, we leave at about 12 noon or 1pm and we have to be gone until about 8pm or 9pm. My parents and brothers would collect us if the weather is bad but we have a double buggie and, in the fine weather, we walk down to Lahinch and wait there until we get collected,” Martin explained.

“Then we wait with my parents in their house in Miltown Malbay and then, at night, we come back again. We have breakfast here and that is good and then, within the hour, we would go to Miltown. We know we have to be out of here,” he added.

The couple and their oldest child had been living in a rented apartment in Ennistymon for nine months but, at the end of last year, they had to move out because the owner decided to sell the property. They left the day before Kathleen gave birth to their second child.

Over the following six weeks, the young family moved between Martin’s parents’ house and the homes of his brothers. They then attended the Department of Social Protection’s homeless service in Ennis and Ennistymon.

“We were told that if we could get private accommodation or a B&B to take us, they would help us pay for it. We were happy with that. We must have rang nearly 100 properties and no-one would rent them. Some people said the house was gone but I knew it wasn’t. We contacted this B&B and we said there were the two of us and the two babies and we were homeless and they took us in. That was three and a half months ago,” he recalled.

Martin and Kathleen’s two children are aged 18 months and five months and, while Martin says the people in the B&B are very nice, it is not an ideal situation to have two adults and two children in one room with no living or cooking area.

“We are all in one room. There is a 21-inch television. There is a bed for myself and Kathleen. There is a small bed in the corner for our little boy and there is a cot for the baby and there is a toilet. This is very comfortable compared to what we were used to for the first month and a half, when we were moving all the time,” he added.

As the summer approaches, the couple fear they may have to leave the B&B but they cannot find any appropriate rental accommodation.

“We are so long there now and we are worried that, coming into the busy season, we will get kicked out. I understood we would be there only a couple of weeks but we are still here,” Martin outlined.

On Wednesday, a total of five houses and apartments were advertised on property website Daft.ie in Ennistymon and Lahinch. Of those, one was a one-bedroom apartment, two were for short-term lets and one was not available until June, according to the ad. Martin doesn’t drive and, with an infant and a baby, needs to be near local amenities including shops and a doctor’s surgery. The final house advertised was not within walking distance of either town.

“A while back, the council said they had a house and they told us we could put our name in for it but it was seven miles from Miltown Malbay and two miles down a country lane. When we landed, it was a five-bedroom bungalow with outbuildings but Kathleen is from a town and I am too and I don’t drive so we don’t have transport and we might be able to get to a shop once a week but not to a playschool or anything like that. It was very rural. I am not choosy but it was very far from a town,” he added.

This is not 26-year-old Martin’s first time experiencing homelessness. Back in 2003, Martin’s parents and 13 siblings were forced to sleep in a tent, after their caravans were destroyed in a fire.

“My parents found it extremely difficult to get rental accommodation at that time and I didn’t know much about it,” he said.

“I thought it was false. I thought if you worked hard enough… but I have been trying and trying and I can’t get any place,” he continued, adding, “Being a Traveller, I think that is part of it.”

Leonard Cleary of the council’s housing section stated, “In emergency homeless situations, customers are provided with assistance by the Department of Social Protection (Social Welfare) to access B&B accommodation on a short-term basis until they can find a house for themselves through rent allowance provided by the same department or if a suitable council house becomes available. It is important to note, though, that Clare County Council and the department work closely together to assist these customers.”

He added that they could not discuss individual cases or circumstances but said “the statutory authorities have worked together to address the housing need evident in the current case”.