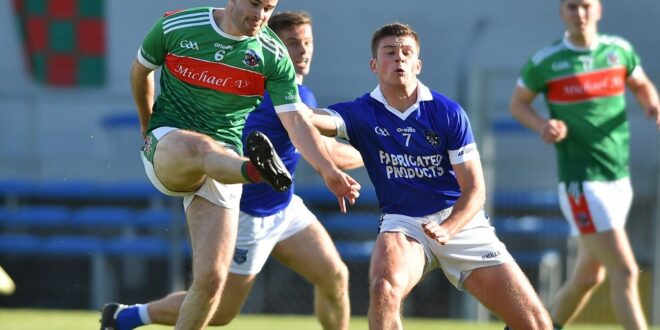 Ciaran Morrissey kicks a point for KIB in the Clare SFC final. Pic by John Kelly

In a year when uncertainty reigned, it was a familiar sight that unfolded at the end of the Clare senior football championship as Kilmurry Ibrickane hoisted Jack Daly aloft in Cusack Park before making the journey over the Hand hill.

Before any assessment of the year as a whole is made, the first task is to praise those who worked diligently to ensure that for a few weeks at least, the constant barrage of Covid case numbers could be forgotten about for a few hours on a weekend afternoon. When lockdown arrived into our lives in March, the gaping void in people’s lives where sport used to be left everyone yearning for even the chance to watch an U-10 training session to get their sporting fix.

It was also going to be a risk in bringing people back ino the live sport setting, and those who were handed the responsibility of ensuring it all passed off without incident deserve the highest of praise. It took a monumental effort to complete championships at all adult grades and credit for that has to go to county board chairman Joe Cooney, county secretary Pat Fitzgerald and all the officers of Clare GAA. The restrictions they had to work under were not of their making so the blame for people being forced into watching games from ladders and van roofs lies firmly elsewhere. Credit is also due to club officers who took on the daunting task of dealing with Covid regulations, while referees who made themselves available for duty also deserve special mention.

In an overall sense, the silver lining from the dark Covid cloud has been the reestablishment of the primary unit of the GAA, the club, as the number one priority. In the lead up to last weekend’s county finals, each and every player interviewed referenced the joy of having uninterrupted time with their full panels. County players were glad to be back where it all began from the very outset of their preparations while clubs players revelled in the increased quality of their training sessions that came from having their elite players available. It is something that simply has to continue even when this pandemic has abated, whenever that might be. The ironic nature of the situation is that more club players will now emerge as county possibilities having made huge strides in their development during this sustained period of action.

So what are the aspects of how the 2020 Clare football championships were run that could or should be maintained in the coming years?

It would appear that most clubs would be in favour of a change in the format from the one seen this year, but there is also an acceptance that it was something which was borne out of necessity. The time frame in which the Master Fixtures committee had to operate in was limited so while the format was far from perfect, it still served its purpose in making sure the championships were played in a timely manner. The playoff round which saw Cratloe lining out twice in 48 hours, and Miltown twice in 72 hours, is not something that is sustainable. With grouped teams likely to be back on the table once more in 2020, it will interesting to see if the group system will be reintroduced. There will also be an extra team in the top tier in the form of St Joseph’s Doora Barefield with the decision not to implement relegation this year meaning that a new format will be needed to accommodate the readjusted numbers.

This year’s format, along with the element of the unknown in how teams would emerge from lockdown was always likely to throw up one or two unexpected stories. That moniker was firmly placed with Lissycasey and St Breckan’s as they reached the last four and can count themselves unfortunate not to have been in the showpiece event. The emergence of talent like Aaron Griffin and Jamie Stack will not have gone unnoticed by the county management while the likes of Joe McGann and Dale Masterson continued their development as top class players. Both teams have the right age profile to build on this year’s experience so making sure that they stick together as a group will be of paramount importance for both. Central to that will be the work that will go on behind the scenes of both clubs to maintain the services of John Ryan and Donie Garrihy but with a promising 2021 ahead, both will likely be hungry to see what it might hold. Cratloe will see 2020 as another opportunity that has slipped by with the south-east Clare men now having suffered defeat in three finals in a row after losing the previous two hurling deciders. The onerous task of serving two masters could well be proving too much, but their class is undoubted.

Kilmurry Ibrickane’s position at the top of the Clare football pile since the turn of the millennium has been unquestioned. There might have been niggling doubts after seeing neighbours Miltown put titles back to back in 2018 and 2019, but the signal of intent sent out in that opening round win by the Bricks proved to be the ultimate warning shot. Much has been written and spoken about the likes of Enda Coughlan, Michael Hogan, Martin McMahon, the Hickeys, Evan Talty and Michael O’Dwyer who between them now have over 50 Clare senior football medals. Their service has been phenomenal, and with Coughlan, Talty and O’Dwyer now holding nine each since their first win in 2002, they have equalled the record held by Doonbeg greats Gerry Killeen and Michael Haugh. The emergence of the likes of David Sexton, Andrew Shannon, Daniel Walsh, Diarmuid King and Aidan McCarthy, who collected their first senior championship medals this year, is the real success story for the Bricks. The experience gained this year by those players added to the growing prowess of Dermot Coughlan and Keelan Sexton gives Kilmurry a solid footing to build toward another golden era.