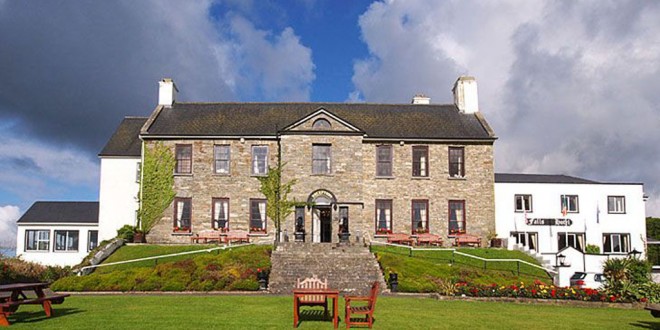 A North Clare man was discriminated against on the grounds of gender by a well-known hotel, when it allowed “a female member of staff enter the gents’ changing room while it was occupied”, it has been found, in what may be the first case of its kind in Ireland.

In the extremely unusual case, The Falls Hotel was ordered to pay Lahinch man, Thomas Flanagan compensation, after it was determined that the Ennistymon hotel had discriminated against him by treating him less favourably than a woman would have been if the circumstances were reversed.

Mr Flanagan contacted the director of the Equality Tribunal on May 13, 2014, claiming The Falls Hotel, Ennistymon, had discriminated against him by subjecting him to regular occurrences of a female member of staff entering the gents’ changing room of The Falls Hotel, “which resulted in his discrimination, harassment and victimisation between October 2012 and January 2014”, contrary to the Equal Status Acts 2000 and 2012.

The director delegated the case to equality officer, Caroline McEnery. Submissions were made by both parties and The Falls Hotel, represented by Carmody and Company Solicitors, and Mr Flanagan, represented by Neil McNelis and Company, attended hearings on October 30 and December 15 last year.

While Ms McEnery’s decision was made in mid-February, the determination was only recently published.

Mr Flanagan was a member of the leisure centre of the hotel. According to the equality officer, Mr Flanagan “stated that it became a regular occurrence that a female member of staff, Ms A, would enter the gents’ changing room, while it was occupied, to clean it or to use it as a thoroughfare between different parts of the building”.

In his submission, he alleged “that, at times, several men were present in the changing rooms but he was alone with Ms A on occasion” and “this put him in a precarious situation, as he was afraid he could have been accused of obscene acts”.

In summarising the hotel’s response, the equality officer outlined that The Falls Hotel claimed Mr Flanagan was not discriminated against. The hotel claimed Ms A is “an employee of the hotel and her duties include cleaning the men’s changing room when she is rostered”.

The hotel “refers to [Mr Flanagan’s] awareness of a procedure, whereby female staff knock on the changing room door prior to entering to warn all patrons and would only enter when it was confirmed it was empty or when they had got the clients approval, as they were clothed at that time. There was no written procedure in place”.

In its submission, The Falls Hotel stated that the complaint was “made in bad faith, is frivolous, vexatious and misconceived and/or relates to a trivial matter and was brought to embarrass” them.

The hotel claimed that Mr Flanagan “approached Ms A and verbally attacked her” and that it was only after she brought this to their attention that Mr Flanagan’s membership of the leisure facility was terminated.

The hotel also claimed, “In order to comply with [Mr Flanagan]’s wishes, more male staff would have to be employed, to the exclusion of female staff.” It called for the complaint to be dismissed.

The equality officer opined that the complaint “does not constitute a frivolous and vexatious complaint”.

She said Mr Flanagan “has established that he is covered by the relevant discriminatory ground, gender” and that “the specific treatment alleged has actually occurred”, adding that she believed “the altercation between the two parties would not have occurred, if the procedure the hotel say was in place was actually adhered to on a consistent basis”.

Ms McEnery said she believed “the procedure put in place by [The Falls Hotel] in regards to the members of staff knocking prior to entering was not properly followed, if in place at all. I have taken into account the oral evidence from a male member of staff that he would not enter the female changing rooms if a female was present. I have also taken into account that [The Falls Hotel] received an additional complaint in relation to the male changing room cleaning by another member, who chose not to renew his membership on the basis of his complaint. [The Falls Hotel] confirmed that [Mr Flanagan] had previously raised this concern with Ms A, prior to this incident. I am of the belief that no woman has been, or would be, subjected to the same treatment in the ladies’ changing room.”

The equality officer clarified that she believed the fault could not be attributed to Ms A because she “followed unacceptable procedures, that were not enforced, if any procedures were in place that were expected for her to be followed, in carrying out her daily duties in her role. This procedure for cleaning was not documented nor did it clearly require the changing rooms to be vacant for cleaning to occur or, at minimum, get the consent of the occupants for a member of the opposite sex to enter the changing rooms when they were occupied. The procedures [The Falls Hotel] suggested were in place, if practiced consistently, would meet the required standard to prevent a re-occurrence of this type of complaint”.

The equality officer also noted there was “no complaints procedure, which should direct members on how to deal with their complaints”. If the two policies were in place, she said, “I do not believe this matter would have resulted in this complaint.”

The equality officer concluded that Mr Flanagan was discriminated against by The Falls Hotel “in allowing a female member of staff enter the gents’ changing room, while it was occupied, to clean it or to use it as a thoroughfare between different parts of the building and this behavior would not have been considered to have been acceptable if it was a female changing room that a male member of staff entered.”

She also found that Mr Flanagan had been harassed.

“I have no doubt that [Mr Flanagan] was uncomfortable and embarrassed by the intrusions by the female member of staff in the male changing rooms. I have no doubt that this occurred on numerous occasions and amount to less favourable treatment. However, I am of the belief that Ms A, or any alternative female member of staff, was acting in the course of their employment in attending to the male changing rooms. I conclude that [Mr Flanagan] was harassed under the definition as per Section 11 (5) of the Equal Status Act, 2000 and 2004, as these actions were ‘offensive and humiliating’ to [Mr Flanagan].”

However, the equality officer found that Mr Flanagan was not vicimised by having his membership terminated.

She noted that the information pertaining to the cancellation of the membership differed and “on the balance of probabilities” that the membership of Mr Flanagan “was terminated based on an alleged aggressive incident, which occurred with Ms A and this was a decision taken by the employer, in an attempt to create a safe working environment for the employee.”

“It is understandable that the relationship was untenable after the incident and it would been preferable if [Mr Flanagan] raised his complaint with management, prior to talking to Ms A, as this resulted in this altercation, which he contributed to. In this respect, I have concluded that [Mr Flanagan] was not victimised by [The Falls Hotel] in terminating his membership,” she added.

By way of redress, the equality officer ordered The Falls Hotel to pay Mr Flanagan a total of €2,000 in compensation.