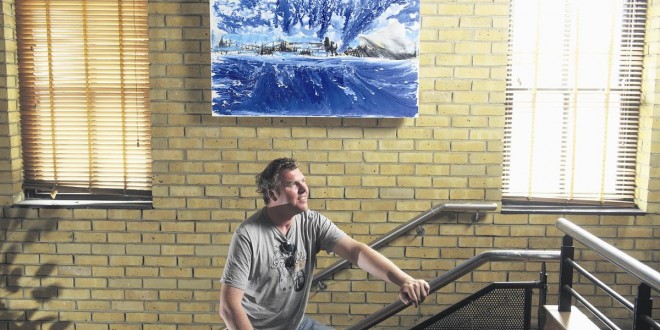 Sean Daly who his auctioning paintings for Pieta House. Photograph by John Kelly

Ennis undertaker in the frame for Pieta House

An Ennis undertaker has put himself in the frame for Pieta House by organising a charity auction of 12 of his oil paintings.
Sean Daly, who has worked with his father, Joe for the last nine years, will unveil his eye-catching exhibition of paintings upstairs in Tom Steele’s Pub, Lifford, this Sunday.

Inspired by the death of a close friend through suicide in 2012, Mr Daly was determined to raise money for the regional suicide prevention centre.

In addition to acquiring a BA in Fine Art from Manchester Metropolitian University when he studied sculpture and photography, he also holds a certificate in animation, which also involves a lot of painting. He is also preparing for another art exhibition in the Ennistymon Courthouse Gallery next month.

Each oil on canvass painting took him about one month to complete. He also makes all the canvass material for his paintings.
Having attended Ennis CBS up to third year, he moved to Ennis Vocational School to pursue his love for painting because he couldn’t do it in the CBS.

“As an undertaker, I have dealt with a lot of tragic suicides. I can paint as many paintings as I want but you can’t bring people back.
“I don’t have the statistics but the amount of Irish people that have thought about suicide but may not go ahead and take this extreme action must be high,” he said.

“A really good friend of mine in Manchester died by suicide in 2012. He was really good looking, he had a good looking girlfriend and a very good job. He was doing well for himself and something happened.

“He left his friends with a lot of sadness. It prompted me to do something for Pieta House.

“Suicide affects every walk of life. You could be a homeless person or a very successful person.”

A numbered list of all the paintings will be provided in the pub to facilite the text bids and arts officer, Siobhan Mulcahy, has placed a guide price on the paintings. Anyone who has successfully bid on a painting will receive their purchase at the handing over ceremony in the bar, which will be marked with an informal traditional music session.

Prospective purchasers should text their name and telephone number along with your bid and painting title to 086 8684750 from this Sunday.