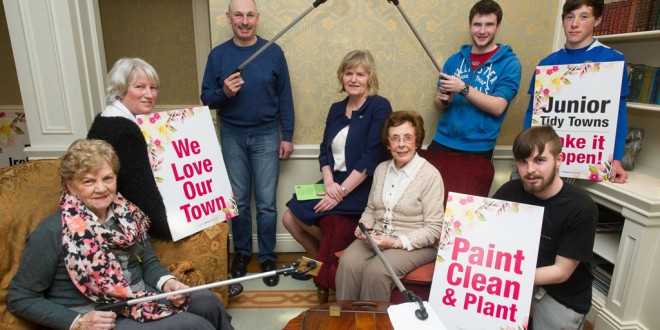 LOCAL community group representatives and members of the business community in Ennis gathered in the Old Ground Hotel this week for the launch of an initiative aimed at enhancing the Clare county town’s chances of becoming Ireland’s tidiest town.

Ennis Tidy Towns Committee launched its new website, www.ennistidytowns.com, and a community-wide campaign called On The Move To Become Ireland’s Tidiest Town, to help Ennis achieve national success in the 2016 competition.
The three-year plan aims to address new criteria of the competition, including waste management and biodiversity. The initiative also features a heavy focus on community involvement and encouraging local residents, community groups and businesses to work together to improve the overall appearance of the town.

The first major initiative being undertaken as part of the plan takes place on April 18, when communities will be invited to participate in a large clean-up that is being facilitated by Clare County Council, in conjunction with An Garda Síochána, The Lions Club, Clare Civil Defence and sports clubs and organisations.

Upcoming initiatives include a garden competition for residential areas, a photo competition for transition students and the cleaning and painting of derelict sites and other locations throughout Ennis.

Recently elected chair of Ennis Tidy Towns Committee, Josephine Cotter Coughlan explained that, “engagement with and the involvement of the local community will be central to the overall success” of the campaign.

“There are a number of new categories that have been introduced to the Tidy Towns competition in recent years that Ennis has not fully capitalised on in terms of maximising its score. It is our hope that an improvement in our performance in these categories will strengthen our overall entry in future competitions,” said Ms Cotter Coughlan.

“For the first phase of our efforts, we are holding a clean-up of the town on Saturday, April 18. We are inviting community groups, businesses and individuals interested in participating in the organised clean-up to register their event on www.ennistidytowns.com, so we can ensure that there is a coordinated approach on the day.

“Clean Ireland Recycling has offered to collect any rubbish and litter collected during the various clean-ups that will be taking place throughout the town,” she added.

Ennis Chamber CEO, Alec Fleming noted Ennis’ strong track record in the Tidy Towns Competition and expressed his confidence that the town could once again challenge for the overall title, which it last won in 2005.

“Ennis received 314 points out of a maximum of 450 in 2014, just six points less than the overall winner. It is clear that a joined-up approach to addressing any of the issues we may have fallen down on in the past will be a huge help in achieving awards success in the future.

“This assistance can come in many forms, from participating in organising clean-ups, general environmental awareness, ensuring shop fronts are maintained, residents painting the boundary walls of their homes and people participating in some of the photography and gardening competitions that will be hosted over the coming months,” he stated.

“I am appealing to the wider business community, in particular, to come forward and pledge their support for this worthwhile initiative. We need business champions who will take the lead and, by doing so, will inspire others to follow suit. From Ennis Chamber’s perspective, we believe that an attractive-looking town is also good for the people who live here and will make it a more appealing location to visit and shop,” added Mr Fleming.

Ms McDonogh explained, “My address to those in attendance focused on waste prevention and resource efficiency, two categories which the Tidy Towns Competition adjudicators place great emphasis on. I spoke about the project ideas that have been developed in the Southern Waste Region and how community involvement in them will ultimately improve Ennis’ overall performance in the competition.”

“I live and work in Ennis and fully support any initiative that seeks to improve its overall appearance. It is important that the community gives its backing to the various measures and events so as to ensure we all have a part to play in the town’s future,” said Mr Whyte, who was voted by the public to be the grand marshal of the Ennis St Patrick’s Day Parade last month.

People can visit www.ennistidytowns.com to register for the April 18 clean-up or for more information about the campaign.