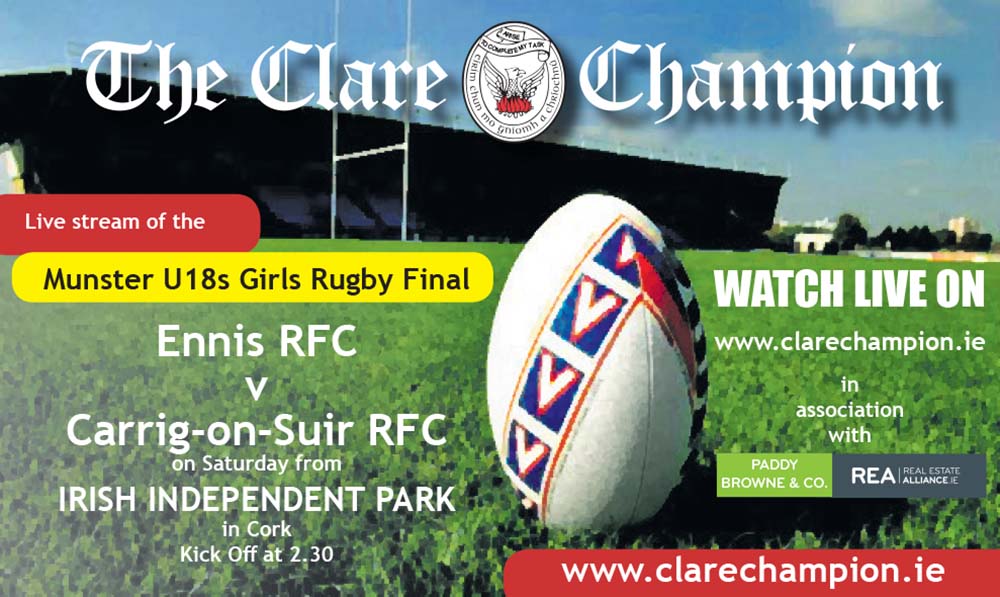 Ennis girls Munster final to be live streamed on clarechampion.ie

A huge weekend lies in store for Ennis Rugby Club, as their U18 Girls side go in search of Munster glory.

They make the trip to Irish Independent Park in Cork to face Carrick on Suir in the Munster Club League final.

The game kicks off at 2.30pm and will be live streamed on clarechampion.ie

What makes it all the more remarkable is that it comes just a year after the girls section of Ennis RFC was revived, and they now stand on the brink of provincial silverware.

Their coach is John Colleran, and he says it has been a brilliant journey so far.

“We started last year with two teams, we fielded U-16 and U-18 sides and a got a huge response. We had no idea how popular and successful it was going to be. We had upwards of 80 girls who turned up to play and from that, we planned out the year. We didn’t play in the league last year because they were only starting out and we were conscious of not throwing them in the deep end. We started out playing friendlies for the first half of the year and then went on to play in the Cup. We got drawn against a very strong Fethard team in the first round and they would have a number of girls on the Munster U18 team at the time. That day was a real eye-opener for our girls in terms of the standard they should be aiming for. After losing that game, we went into the bowl competition and won that tournament which was a brilliant achievement for the squad. Our U16’s also won the bowl, so suddenly we had a group of girls who had never played rugby when they came together at the start of the year, and now they were winning silverware” he noted.

John is quick to point that while he is involved in the coaching of the girls, there is a huge team of volunteers involved with the club who are all working hard to ensure the right procedures are in place.

“The genesis of this came from Lorcan Hoyne and Alan Harvey who came up with the idea and put it out there. After they did that, it was all about gathering the manpower to keep the show on the road and I really don’t think they expected to get the massive response that they did in terms of players. The lads asked me to get involved then in the coaching side of it, and suddenly my daughter turned around to me and said that she wanted to start playing. A lot of the girls would have all been hearing about the boys playing rugby and winning titles so once the opportunity was afforded to them to do the same, they turned up in massive numbers” he said.

With increased playing numbers come increased demands on a club in terms of the work that goes on in the background, and John says the sense of community within Ennis Rugby Club meant that people were only delighted to get involved.

He said: “There are great people involved in Ennis Rugby Club across all the grades and codes. You have people who are still playing at adult level who have gotten involved in underage coaching, and even more then who are working behind the scenes. It’s very important to have people who co-ordinate the effort, and that’s where the likes of Lorcan and Alan come into it and take away all the admin side of things, it means we can just focus on the coaching and getting that side of it right. Everything is worked really well, and then when you have the bit of success, it leads to a bit more. Four of our girls from last year’s panel were brought onto the Munster squad and played during the inter-pro’s, and we had two more who were part of the Seven’s squad”.

It’s already been a positive year for the group, as they came through the pool stages of the league after topping their group. Their only defeat came against local rivals Kilrush but the Ennis girls exacted revenge when they clashed in the return fixture. A big moment for the squad came in their semi-final tie though, when they were re-united with a Fethard outfit who had beaten them comprehensively in their maiden year. John feels that was a huge moment.

“Fethard finished second in their group which meant that we were at home for that semi-final, and that was a huge moment for us in the context of what had happened the previous year. They lost a few players who were over the age, but we turned it around and had a good win, beating them 36-7. That was a great boost for the girls and really showed that when they knuckle down, they are well capable of competing with the top teams. That set up our final with Carrick who were pushed all the way by Kilrush in the other semi-final. It’s really great for girls rugby in Clare to have two really strong teams competing in the province, and huge credit is due to George Nolan back in Kilrush for all the work they are doing” said John.

Next up now is that trip to Irish Independent Park on Saturday afternoon, and John is confident it’s something that their squad will enjoy.

“It’s a huge experience for them and it’s well deserved. Obviously they are going to be nervous, so this week will be all about just keeping them relaxed and going over what we want out of them on the pitch. We will be heading down as a group and getting the minds focused as early as we can. I honestly believe that if they stick to their guns and stick to the way they are playing, they can do it. There’s a great belief among everyone involved in Ennis that we are never beaten until the end. If they keep the heads and trust in each other’s ability, I am fully confident they will come out winners, but it will be tough” he noted.