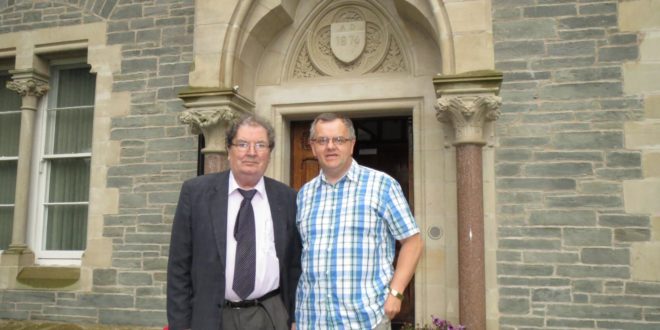 THE late John Hume was a man with a “vision of justice for all”, according to Ennis’ Parish Priest Fr Tom Ryan, who came to know the Nobel Peace Prize winning politician while working in Derry in the 1980s.
Following his ordination in 1984 Fr Tom was appointed to St Eugene’s Cathedral in Derry, where on Wednesday Mr Hume was laid to rest.
Sharing his memories of the prominent politician who played a leading role in talks which led to the Good Friday Agreement, Fr Tom told us, “Over the years I would have gotten to know the family. John was the politician who was on the go all the time, and his wife Pat was the one who kept the show going on the ground in many ways.
“He was the man who had the vision, and who wanted to implement his vision of justice for all. He had a great sense of justice, and he was aware of the injustices that were happening in Derry and in Northern Ireland and the root causes that were breeding injustice, housing and unemployment.”
He outlined that, “Family, friends and faith was the hallmark of John Hume for me.”
“Family was so important to him. His wife Pat was the woman behind that made him the man he was. She kept the family going and she kept the constituency going when he was away in Europe and in America. And she was his greatest confidant and supporter. He wouldn’t have been the person he was, he wouldn’t have achieved what he did only for his wife Pat.
“And then he had good friends around him in the political circle, Seamus Mallon and others in the SDLP who were his colleagues in trying to achieve peace by peaceful means and by talking and dialogue. He took risks in talking to Sinn Fein and Gerry Adams, which wasn’t always popular with his own people, but he believed in what he did. That he was doing it for the greater good, which was proved right. And deep down he was a man who had faith and a belief in God all his life. He was a daily mass goer and a man who prayed each day and that sustained him.
Speaking about Mr Hume’s life, he recalled how he had studied for the priesthood “but soon realised it wasn’t for him” so he returned to Derry where he began teaching.
His first endeavour in public life began in the 1960s when he was involved in the setting up of the credit union in Derry. “For most people in Derry at that time banks would not have been an option because they didn’t simply have money. Saving, being able to get a loan, and to be able to control your own finances was something that was important to him, to give people a sense of dignity.”
He went on to become the first chairman of the new Derry Housing Association, campaigning for social housing and the chair of the University for Derry campaign. His involvement with the Civil Rights movement saw him co-found Derry Citizens’ Action Committee to organise non-violent agitation for civil rights.
“He saw that the violence of the ‘70s, and the killings and the shootings was going nowhere.” He was a co-founder of the SDLP, and second leader of the party, elected an MP and MEP. “He helped found that party to give a voice for nationalism at the table, non-violence was very much part of their way. He worked all his life to bring people together by non-violent means, and at times, it was a lonely path.”
He recognised the importance of America’s involvement in finding a solution to problems in the North. “He especially saw the need for investment, because Derry was very much a run down city when I was there first, with unemployment the biggest issue. He got investment into Derry and infrastructure built there and it is a transformed city today because of him. That led of course led to his involvement in the Good Friday Agreement in 1998.”
Sadly, dementia became a part of his life in his later years and he retired from politics and public life, returning to Derry. The people of Derry never forgot what he did for them, Fr Tom tells us.
“He was well known and well respected. I would on my many visits to Derry always stay in St Eugene’s Cathedral and he would be a regular there every day at Mass every morning. And he’d come back in the evening for an hour or so of prayer or adoration of the blessed sacrament. The people there would be very good to him.
Family members would always be concerned if a member had dementia, but the Hume family never worried because John was loved and cared for and people around the town if they saw him they would bring him home
“I would have that experience myself on a few occasions, he would come into the parochial house for a mass card to be signed and he’d sit down and have a cup of tea, and I’d say John do you want a lift home and he’s say yeah, I’ll take it from you if you’re going.”
For Wednesday’s funeral mass at St Eugene’s Cathedral, Mrs Hume and her family requested that only small numbers attend in line with Covid-19 restrictions. While thousands would have wanted to pay their respects, the family asked that a candle be lit in remembrance.