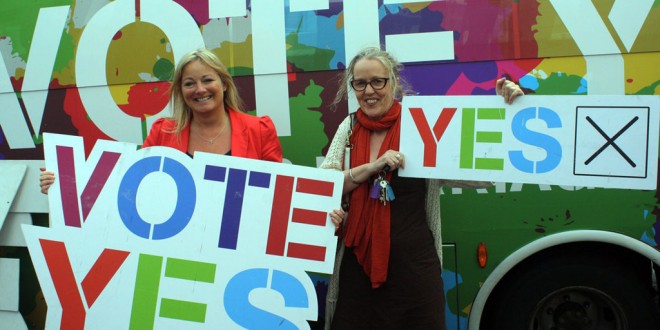 The Yes Equality Bus visited Clare on Monday afternoon to join members of Yes Equality Clare to campaign for a YES vote in the forthcoming Marriage Equality Referendum on May 22.

The bus began its nationwide tour on April 22 in Dublin and will bring the case for a Yes vote to town squares across the country, covering 66 locations in 26 counties over 27 days.

Local Yes Equality Clare spokesperson Orla Vaughan said, “I’m voting YES so that future generations of LGBT children are born into a country that accepts them for who they are before they themselves realise it. Giving them an equal footing in Irish society to their heterosexual friends from birth.”