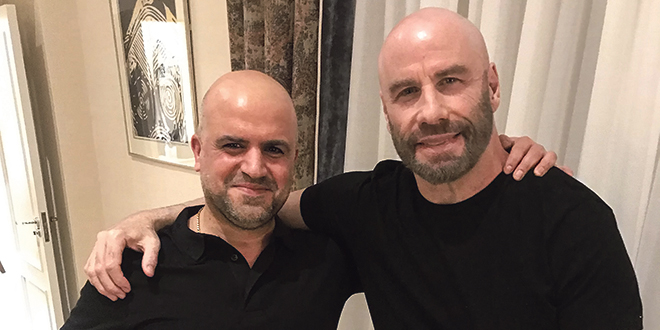 AN ENNIS salon owner has proven to be a cut above after a hair-raising brush with a Hollywood star. Hassan Jiad, owner of Panache Hair Design, was recently called on to cut the hair of actor John Travolta.
The star of Saturday Night Fever, Pulp Fiction and Grease was so impressed that he has given Hassan his private telephone number and has asked him for a repeat appointment in New York later this month.
The multi-award winning actor had been staying in Dromoland Castle Hotel when he decided that he needed a trim. Hassan, who is originally from Iraq and has been living in Ennis for 23 years, was working in his salon when he got a mysterious phonecall from the hotel.
He revealed, “They said there is a man here who wants you to give him a haircut. I asked who it is, and they said they will let you know at reception when you get here. That was about 2pm, and they wanted me for around 3.30pm. I said I’ll try my best. They’ve rang me before for different people, and all of the lads in the hotel come to me for haircuts.
“When I got there this man walked over to me and said how are you doing Hassan, he gave me his hand straight away. He was wearing a baseball cap. I didn’t really recognise him then, I thought he was one of my customers. He looked familiar, but I couldn’t put it together. Finally, it clicked. Only one or two nights beforehand I was watching one of his movies. I asked him what way do you want it cut, he said I’ll leave it to you. So I got rid of the grey hair, shaved his head with the blade and trimmed his beard. He was very happy for a finish.”
He says that the pair “got on really well”. “He was a really nice guy. We spent nearly three hours chatting, I gave him the haircut and we just kept talking. He’s very friendly. You wouldn’t even know this man had wealth and everything, he is such an easy going person.”
Hassan was already planning to head over to America later this month, and when Mr Travolta heard this he decided to look for another appointment.
“He liked the work I did for him and he wants to see me again in the States. I told him I’d be in New York in two weeks time and he said, OK can we do this again. I’m a green card holder, so I got over and back often. He said, when you are over just text me and I’ll send somebody to pick you up. He gave me his private number, he doesn’t give that to anybody. That was so nice of him and I’m looking forward to meeting up with him again.”
He adds that Mr Travolta had nothing but good things to say about the five star Clare hotel. “He was over on a business trip and stayed over one night in Dromoland to relax and get his energy back. He has stayed there before, he loves the hotel, the staff, the service, everything. He mentioned he has great time for the people working there. It’s great to see somebody like that coming to this side of the county.”