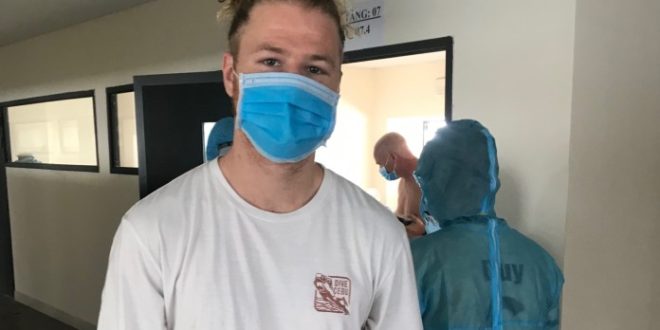 A CLARE man, who was detained in mandatory quarantine in South East Asia, has voiced his relief at getting out of the Coronavirus control centre.

English teacher Darragh Collins from Ennis, and was taken by Vietnamese health authorities from his home to an isolation facility, after he attended a bar which was believed to be the source of a Covid-19 cluster in Ho Chi Min city.

After being detained for a fortnight in quarantine at the Hoc Mon University campus, with up to 100 other Irish nationals, Mr Collins was released last weekend. He previously told The Champion that while the detention wasn’t a violation of his human rights, there were concerns over hygiene and access to accurate information about the quarantine period.

This week, he told The Champion he was delighted to have been released and to be able to return to his apartment, to the huge relief of friends and family.

“Home and safe now, I got out on Saturday morning,” he confirmed. The Shanaway Road native was released after a second Covid-19 test proved negative and while he is relieved, noted that he faces and other Irish nationals face potential issues with paying rent, now that teachers have had their pay cut and jobs are at risk.

Mr Collins is being assisted by Deputy Cathal Crowe who has previously helped a young woman from Clarecastle to return from Peru. The Fianna Fáil TD said he had found that a combination of formal and informal contacts with the Clare community abroad were invaluable.

The Department of Foreign Affairs continues to warn those travelling to and working in Vietnam that mandatory quarantine may be imposed without any notice, and that the authorities have made clear that visitors and residents alike are required to comply.  “No exceptions are made on the basis of nationality or pre-existing medical condition,” the Department noted.

Fiona McGarry joined The Clare Champion as a reporter after a four-year stint as producer of Morning Focus on Clare FM. Prior to that she worked for various radio, print and online titles, including Newstalk, Maximum Media and The Tuam Herald. Fiona’s media career began in her native Mayo when she joined Midwest Radio. She is the maker of a number of radio documentaries, funded by the Broadcasting Authority of Ireland (BAI). She has also availed of the Simon Cumbers Media Fund to report on development issues supported by Irish Aid in Haiti. She won a Justice Media Award for a short radio series on the work of Bedford Row Project, which supports prisoners and families in the Mid-West. Fiona also teaches on the Journalism programmes at NUI Galway. If you have a story and would like to get in touch with Fiona you can email her at fmcgarry@clarechampion.ie or telephone 065 6864146.
Previous Man held after Cloughleigh stabbing death
Next Free online courses with Further Education and Training