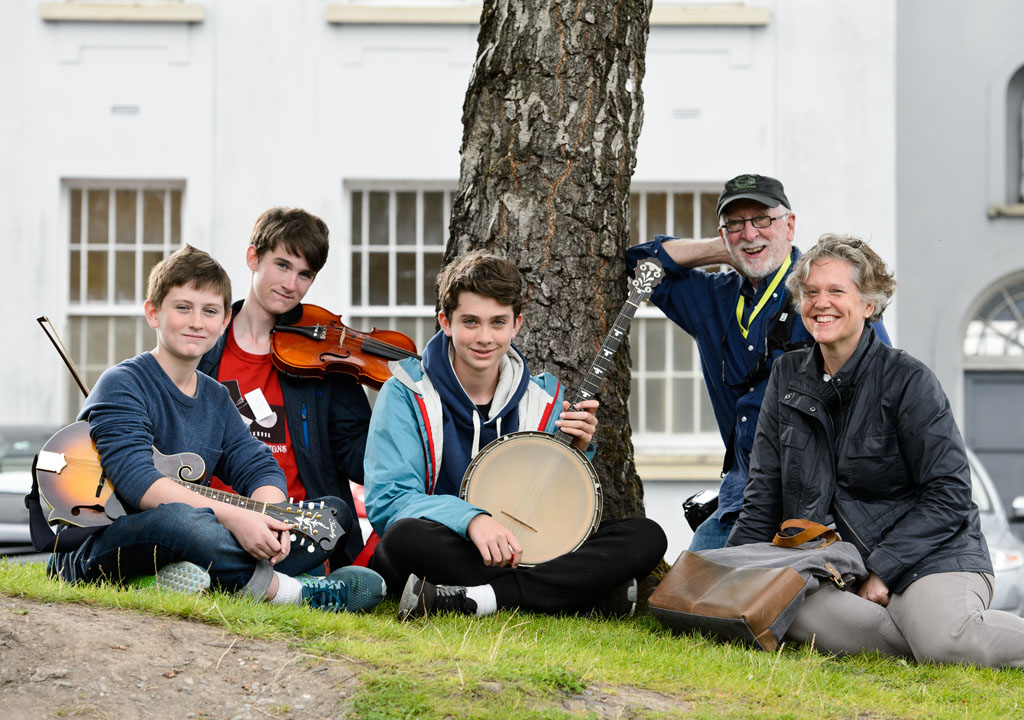 AMONG the throng of overseas visitors to the Fleadh in Ennis this week were Laura Coleman and Alisa Mee from Saint Paul, Minnesota. Eleven of the group are staying in a house in Spanish Point for the duration of the Fleadh, while their children are among 18 musicians representing the Centre for Irish Music in the Mid-West US city.

Laura’s son Finn plays the harp, much to the bemusement of his mother. She has yet to work out why but is going with the flow.

“Our kids have been involved at the Centre for Irish Music for about three and a half years. It all started because our youngest son Finn woke up one day and decided that he had to play the harp. We don’t know why. The harp? It’s not our national instrument. There’s nothing iconic about the harp in Minnesota,” Laura explained.

“It’s not a scene,” confirmed Alisa, whose son Cathal plays the button accordion.

“We signed him up for harp camp. It was all girls and we figured that would put an end to it. It didn’t. In fact, he loves it and hasn’t quit. My husband likes to say that he’s the only ice hockey playing harp player in Minnesota. We don’t know if that’s true. We’ve never verified that but it’s fun to say. I walked by a class of older players in the harp room. There was a kid playing like an archangel and I did see my son ask himself, ‘what am I doing here?’ He’s the kid that dragged us all into this. He’s our youngest and our middle kid Declan started playing guitar and now he plays banjo,” Laura added.

“My husband is Irish. He’s from the north side of Dublin, so we’ve been here lots of times. But this is our first fleadh and I haven’t been in Ennis in 20 years. It’s a beautiful setting and the atmosphere is really positive but I don’t know how it will be when, as predicted, 90,000 people show up this weekend,” she said.

“We’re a little worried about that,” Laura interjected.

The music school in Saint Paul caters for around 180 students.

“The Centre for Irish Music is a very unusual school in the Mid-West. Saint Paul thinks of itself as an Irish town but it’s far more German or Swedish. I’m on the board and this is what happens at these small places, you get sucked in. There about 180 students and there are some very interesting Irish musicians who have made a home in Minnesota including Daíthí Sproule, who plays guitar with Altan. None of us know what we’ve gotten into. Our kids happened to do well at the Mid-West Fleadh Cheoil but we’ve learned from talking to Irish kids that they have to compete harder than our kids. I think it’s going to be an education,” Laura predicted.

However, Alisa is hopeful that the standard of competition will raise the level of the Saint Paul competitors.

“I think it motivates them to see these other kids who can play at a standard higher than they can play. It’s good for them to see the next level, when they come here.”

While Laura and her family have never been to a fleadh before, she is not entirely ruling out heading for Drogheda in 2018.

“I don’t think we’ll ever do this again, although I heard myself say this morning, that ‘the next time we come to the fleadh, this is how we’re going to do it’. There are 18 children here and we don’t know our way around. My husband is driving a stick shift on the left-hand side of the road. We don’t know what we’re doing but we’ve got this far,” she laughed.

While Alisa’s son Cathal is competing, she has decided to take fiddle classes herself.

“I’m one of the six adults in the adult class at Scoil Éigse. I’m playing the fiddle. I just thought, I might as well since my son is here all day. The instructor is hitting my sweet spot. He’s nice and laid back. There are no hot shots in the class, so it’s not intimidating,” the Saint Paul fiddler said.
With mostly divisive news emerging from the US almost daily, Laura is enjoyed the less intense atmosphere in Ennis.

“One thing I’m tuning into, because it’s all depressing news at home, is how joyful people are. People have been lovely and we’re all here for something that is fun. It’s a nice diversion,” she reflected.