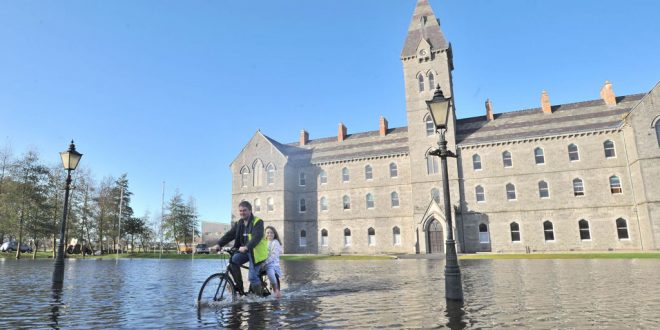 MAJOR works to prevent serious flooding in Ennis are now almost complete, OPW Minister Patrick O’Donovan has confirmed. Minister O’Donovan has revealed two of the major elements of the Ennis South Flood Relief Scheme, at St Flannan’s College and Ballybeg, are “substantially complete with only minor snagging remaining”.
The minister has also accepted an invitation to visit Clare where he is set to explore a proposal to develop a greenway between Ennis and Clarecastle.
He said flood works at Clareabbey suffered a delay in recent weeks “due to unforeseen difficult ground conditions”. These difficulties, the minister added, meant the original embankments proposal at Clareabbey had to be redesigned.

However, he said this redesign has now been completed and that the additional works are “progressing more rapidly than initially expected” and have “largely been brought back into line with the original programme”.
The minister was speaking in response to a parliamentary question from Clare TD Joe Carey. The minister also told Deputy Carey that the new culvert overflow system constructed at St Flannans, which has suffered from severe flooding down through the years, operated “very successfully” during recent bad weather conditions.
Deputy Carey welcomed the significant progress made on the flood works.

The Clarecastle-based TD said, “It is very welcome news to hear that these vital flood works are nearing completion, especially considering the works were previously delayed for nearly a decade before finally beginning last year.

“The provision of this scheme has ensured that the unsustainable practice of pumping water away from St Flannan’s College and at Kildysart Cross for months on end with diesel powered engines will no longer be required. The long awaited construction of this crucial piece of infrastructure means people living in the affected areas will now not face another winter or spring with a sense of dread that their homes, businesses or secondary school will end up under water.”

Deputy Carey added, “I would like to commend Clare County Council, engineering consultants Ryan Hanley and Ward & Burke Construction Ltd for their work in progressing this vital project for Ennis and Clarecastle and in overcoming the challenges they encountered along the way.”

The  local Fine Gael TD said the improved embankments as a result of the flood works now present “an opportunity” to develop a new greenway between Ennis and Clarecastle.

Deputy Carey added, “This is something I have been working upon with business and community development groups for the past two years and I am delighted Minister O’Donovan has accepted my invitation to visit Clare to further explore this exciting proposal and to visit other areas in the county.”