ENNIS welterweight Paddy Donovan has signed a deal to turn professional with US promoters Top Rank, while former World Champion Andy Lee will train and manage the 20 year old.

From Clancy Park and a former student of Ennis CBS, Donovan has won 13 Irish titles and is a former junior world silver medallist. On Thursday afternoon Lee said he has everything it takes to win a professional world title. “He was a very successful amateur, he won everything there is to win, only five defeats in 166 fights. When you watch him box he is very exciting. He has all the ingredients to be a world champion as a professional boxer. You can see his style, how he fights, also his attitude. Having got to know him over the last three or four months, he has the right character and the personality to make it and go all the way.” 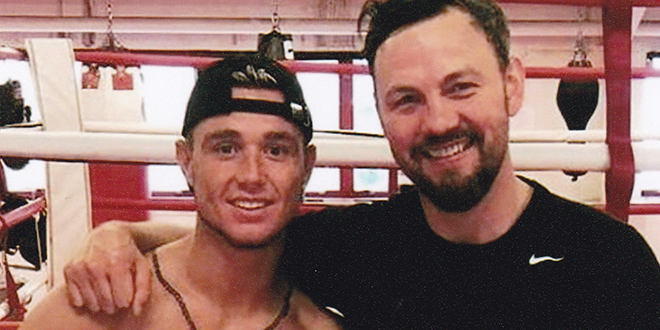 Top Rank have been involved with a huge number of boxing’s greatest names, from Muhammad Ali to Floyd Mayweather and Tyson Fury, and Lee reckons the Ennis man can join the elite in the coming years. “When you consider his talent and the team behind him, there are a lot more reasons for him to become a world champion than to not become a world champion.”

For the most part Donovan will be based in Ireland, training in Limerick and Dublin. His first fight is expected to be in America this autumn.

Lee said he has rebuffed numerous requests to become involved with fighters since his retirement, but was tempted back into the sport by the potential of the Ennis man. “I wasn’t even planning on getting into it (boxing) again. Paddy came along and I think it’ll be a long time before you see another prospect like him so it was a chance to be involved with someone special.”

He feels Donovan will easily adapt to the professional game. “He’s a southpaw, he’s very quick, he has good reflexes and he fights using his reflexes. He’s aggressive, and what stood out about him as an amateur, was that he punched very hard and had a lot of wins by stoppage and knock out. That’s very rare as an amateur and he does that naturally. That’s only going to improve as well as he learns how to punch with more intent.”

The Limerick man says that there are clear advantages to being managed and trained by the same person, while he feels Top Rank are ideal for Donovan. “You need a manager in boxing and no one knows the boxer better than the coach. In my career I had two coaches, Emmanuel Stewart and Adam Booth, and both of those trained and managed me. There’s a huge advantage in that you’re not paying two people to do one job. When it comes to it, this is a business, everyone will be taking a percentage of his purse and me combining those roles will lessen that part of it. With the experience I have in the boxing world I know fighters and how to match fighters. Top Rank have a great record of taking young boxers and turning them into world champions, a lot of them superstars, you look at Del Hoya, Mayweather, Lomachenko, they do it over and over again.”

He says he has been aware of Donovan for a number of years, but has got to know him quite well in recent months and he says the young fighter is doing well in sparring. “He has already been in sparring with guys who are preparing for world titles and he is holding his own.”

Owen Ryan has been a journalist with the Clare Champion since 2007, having previously worked for a number of other regional titles in Limerick, Galway and Cork.
Previous Regular to find dead carcasses on West Clare holdings
Next Fittest family style event at St Conaire’s