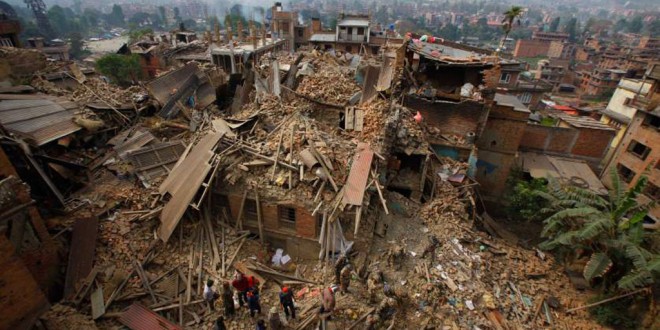 Buildings flattened after the earthquake in Nepal.

A YOUNG Ennis doctor in Nepal has appealed for urgent donations to buy food and medical supplies after the the devastating earthquake at the weekend, which has left thousands of people killed and homeless.
Melanie Hennessy sent a Facebook message using the last of her phone battery to appeal for help for the children of the orphanage and the community now surviving in makeshift huts in very wet weather, following the 7.8 magnitude quake and the aftershocks. 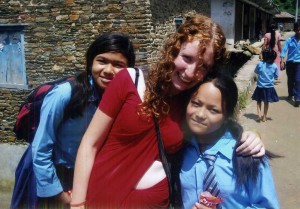 The 25-year-old doctor, who attended Coláiste Muire Secondary School in Ennis, founded charity Draíocht and NGO Team Nepal, while studying medicine in NUI Galway in 2008.
The charity and NGO have since overseen a new orphanage and school built in Talamarang, which is a small village high in the mountains, about two hours north of Kathmandu.
“Namaste from Nepal,” Melanie wrote. “Thank you all for your concerned messages but apart from being slightly ‘shook’, me and the kids are doing fine.
“On a serious note, the reason I’m using the last of our phone battery is to ask for your help,” she wrote.
“Unfortunately, everyone hasn’t been so lucky, with many in the village dead, including children. More than 90% of the houses are completely destroyed, with everyone, including us, sleeping in the fields in makeshift huts (and in the rain).
“We’ve started distributing the children’s home food stores, as some people have absolutely no food and others are running out quickly,” she wrote.
“I’ve never asked directly for help before, as I know many people have their own problems but we do not have enough resources and people are going to start dying from lack of food and basic medical help.
“So please, if you have any extra money, will you send it to the Draíocht account….I won’t be on the internet again but if you look on the Draíocht page you can get the bank account details…and I promise that all the money will be used to help feed, provide medicines and rebuild the buildings, thank you,” Melanie wrote on Tuesday morning.
More than 5,000 people are already reported to have died as a result of the earthquake and severe aftershocks and the death toll may rise as high as 10,000, the country’s prime minister has warned.

The Talamarang orphanage survived the shock mostly intact, with just one gable wall falling, but the school was reduced to rubble, said Melanie’s mother, Theresa, who woke to the traumatic news on Saturday.
“Mel went back out to Nepal in early April and early on Saturday, I heard about the earthquake. I was beside myself with worry, until Mel rang about 1.30pm to tell us she was ok. I didn’t know how bad it was there and she rang again on Sunday night and then I knew all the kids were fine and that one wall in the orphanage had collapsed and the whole school was gone as well,” Theresa said.
“The nearby village was flattened as well and the villagers are homeless. With the aftershocks, everybody is afraid to go inside what’s left of the buildings.
“The village people have moved up to the orphanage and they’re all sleeping outside on land the orphanage owns. They had a good stock of food in the orphanage, so they were fine but because all the local people are there now, they’re running out of food and medical supplies,” Melanie s mother said.
“We need to do fundraising for them. A lot of her friends are going to fundraise in Ennis and Galway and we want to raise awareness of the orphanage’s needs now,” Theresa said.
Melanie’s sister, Kim said another way for people at home to help is to log on to the www.draiocht.nuigalway.ie website, or their Facebook page and make a donation, which will go into Draíocht’s bank account.
“The aid that the Government are giving is all stuck in Kathmandu. None of the villages are getting any food or medicines yet; they’re just left to fend for themselves and all the orphanage’s supplies will be gone soon,” Kim explained.
“If they can get access to money, they’ll be able to go and buy the food and medicines they need right away. So we’re asking people at home to help Mel and the children if they can,” Kim added.