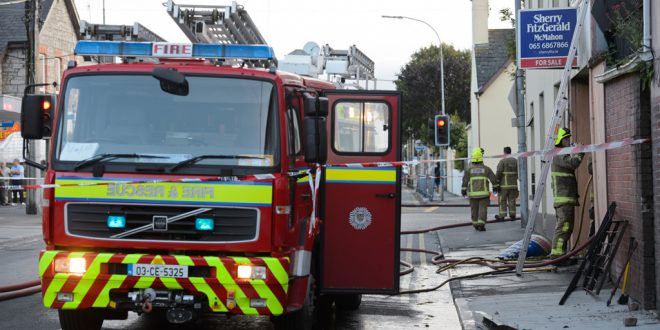 Emergency services at the scene of a fire on Market Street, Ennis.

A derelict building in the centre of Ennis was gutted following a fire on Thursday night.

The Clare Fire Service were called to the scene of a fire in the former O’Neill’s Furniture Store in Lower Market Street,
Ennis at around 9.41 pm.

Three units of the Ennis Fire Brigade and one from Shannon worked to bring the fire under control.

It is understood that the blaze started at the rear of the unused premises, which fronts onto Carmody Street and quickly spread to the front part.

The road near the building was closed off while the firemen were battling the blaze and traffic was diverted with the assistance
of Ennis Gardaí.

One person in an adjoining property was evacuated as a result of suffering from what was described by Clare Chief Fire Officer, Adrian Kelly
as a small amount of smoke inhalation and treated by ambulance personnel.

Having secured and tided up the building, the last fire brigade left the scene at 11.08pm.