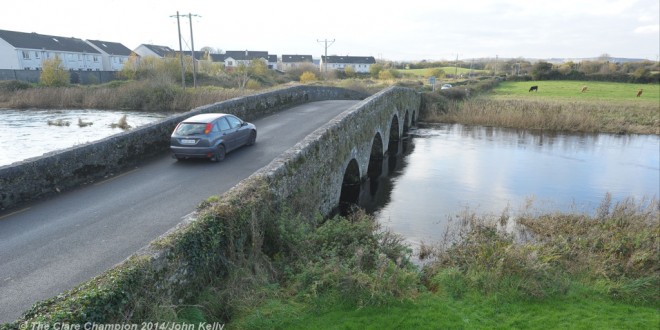 Drehidnagower Bridge, near Drumcliffe, on the outskirts of Ennis, is likely to be closed to the public for the winter months due to rising river levels and the requirement to undertake structural remediation works.

In making the announcement, Clare County Council said the temporary closure of the bridge to vehicles, cyclists and pedestrians on the Local Road L4587, located north west of the town, is being enforced due to safety reasons while river levels remain elevated.

The bridge, which crosses the River Fergus, dates back to the early 19th century and has been the subject of a 30km/hr for a number of months.

A council spokesperson said, “The council recently conducted a routine survey of the bridge which determined the requirement for strengthening works to be carried out on the structure’s undercarriage. With water levels rising on the River Fergus, the council has deemed it appropriate for public safety reasons to enforce a temporary closure, which is likely to continue up to March 2015.”

The local authority has designed a rehabilitation scheme for the bridge and this will proceed to tender and construction stage when the necessary environmental approvals are in place. Therefore, no precise timescale can be given on the commencement of the required remediation works.

According to the coucil spokesman, the repair contract will run over a period of approximately three months.

Temporary traffic management and associated signage will be put in place to divert traffic away from the bridge and along the designated diversion routes. An alternative route via L-4599 Drumcliff Road, R-352  L-4596 Watery Road wCusack Road to Maid of Érin R-458 Highfield Road &ill be in operation.