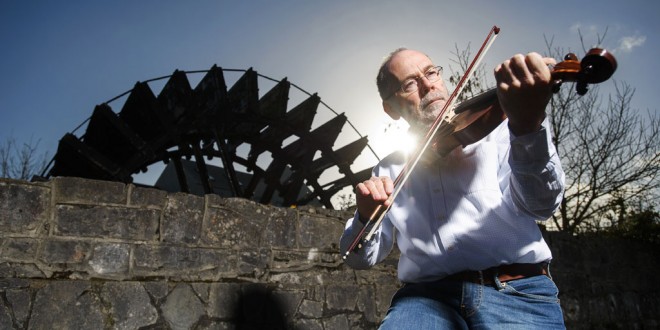 Mícheal Ó Riabhaigh, chairman of The Fleadh Down In Ennis working group. Photograph by John Kelly.

THE economic spin-off for Ennis, as the host town for Fleadh Cheoil na hÉireann 2016, could be worth up to €60 million.

The figure has been arrived at based on independent assessments conducted after recent Fleadh events.

Hundreds of Clare businesses are already tuning up to receive a windfall ranging from €40m to €60m, when Ennis stages the Fleadh in August 2016, according to the findings of economic evaluations compiled by Fáilte Ireland and independent consultants.

While Ennis will be the main economic beneficiary, most towns and villages around the county will also benefit from Fleadh dividends, as Irish musical events are held in traditional strongholds, such as Tulla, Kilfenora, Feakle, Corofin, Ennistymon, Doolin, Miltown Malbay and Kilrush, as well as Shannon and Sixmilebridge.

Ennis hosted the festival in 1956 and 1977 and hopes are high that it will secure it for a second successive year, following another presentation to Comhaltas Ceoltóirí Ard Comhairle in March 2016, when a decision will be made on the successful town for 2017.

Sligo Fleadh Cheoil PRO, Micheál O’Domhnaill, estimates last year’s Fleadh, which was held from August 10 to 17, generated €50m for the local economy, based on figures compiled by Fáilte Ireland market research conducted in Cavan during their Fleadhanna.

An economic and social impact study completed by Venture Network revealed staging the Fleadh in the North of Ireland, with Derry as the host town in August 2013, generated an estimated Stg£42m or €59.58m.

Fáilte Ireland has confirmed that staging the Fleadh will attract thousands of additional tourists to the county long-term, as a result of its planned promotion of the Clare section of the Wild Atlantic Way as an international Irish traditional music mecca.

Of the domestic attendees, 43% were local and 36% were domestic visitors, who stayed three days on average. Private homes were the most popular form of accommodation for 30% of the attendees, 19% used self-catering, 17% hotels, 11% camping and 9% bed and breakfast.

Sligo Chamber chief executive officer, Paul Keyes, revealed that a five-week audit of festival media coverage showed it occupied 329,000cm2 of columns, which was worth an estimated €1.15m in equivalent advertising space.

In addition to coverage from regional, national and international print media, there were over 14 hours of deferred television coverage and 16 hours of live radio reaching.

“Staging the Fleadh generated a huge economic benefit for Sligo and it was the glue that brought the whole community together. It increased Sligo’s profile nationally and internationally,” he said.

The study stated the 2013 Fleadh brought over 400,000 visitors and 4,500 participants to Derry, many of whom had never had the opportunity to visit the city previously.

“The event had a significant strategic impact. From a Programme for Government perspective, through to departmental strategies for arts and cultural development, economic development and tourism, through to volunteers, good relations and heritage, it is clear that the Fleadh event has directly contributed to the key aims and objectives of these strategies,” the report stated.

An evaluation of media coverage revealed Derry was mentioned in 2,346 press articles and 443 broadcast pieces between January 4, 2012 and October 31, 2013.
This generated an advertising equivalent of Stg£2,761,415, with 82% of all press content emanating from regional publications, while national daily publications carried 12% of the press volume.

Fáilte Ireland’s head of operations for West and Mid-West, Fiona Monaghan, confirmed that the organisation has already identified traditional music as a unique selling point for marketing Clare, as part of their overall promotion of the Wild Atlantic Way.

The agency will be bringing in international journalists in 2016 and will work with the local Fleadh committee to ensure they can exploit all marketing opportunities for Ennis and Clare.

She said a lot of the international delegates will be coming from the United States, who will be able to enjoy easy access through Shannon Airport.

“The staging of the Fleadh will help Ennis and Clare position itself as a key Irish traditional music destination in Ireland and abroad,” she said.