Home » Regional » East Clare » End of an era in education

End of an era in education

THE McNamara family from Ballymacdonnell will be ending an era of primary education in St Patrick’s National School in O’Callaghan’s Mills this September when their youngest, Edel, starts secondary school.

The family have had children going to school in the ’Mills continuously over the past 26 years and now the Geraldine and Frank McNamara have bade their farewells to making lunches, attending functions, matches and parent teacher meetings at the school.
Since 1984, the McNamara’s six children, Sinéad, Antoinette, David, Louise, Pauline and Edel have all passed through the school starting with their eldest, Sinéad.
The McNamara’s have had many first days and last days at school in the ’Mills bringing with them happy memories. But while there is an element of lament as they cut ties, there are some sighs of relief, as Geraldine realises that the only lunch she will be making after 26 years is Frank’s.
Acting principal Phil Ryan has had each of the six siblings pass through her classroom at one time or another.
“We’ll miss them here, we’re so used to having them here you see. I had each of the six at different stages. We’re used to them here at this stage. There has been no other family that has passed through the school continuously as long as that, to my knowledge. We’ll be sad to see the family gone. It is an end of an era really,” Phil explained.
Geraldine explains that it will be a change for the family this September but one that comes with mixed emotion.
“We were in and out of the school for so many different things over the years. We will miss it. We got to know so many people and what was going on in the area. When you think about it really, it was a big part of our lives for so long,” she said.
Looking back on the years when all the children were at school in one shape or another, Geraldine recalls the mornings in particular.
“It was pandemonium in the house. Some of the children were very laid back about it. We never had anyone kick up about not wanting to go to school though. I hated having to make the lunches but I’m delighted St Joseph’s Secondary School has a canteen,” she sighed.
Edel McNamara, the youngest of the clan, said her goodbyes to her school this summer and is preparing for a new adventure in St Joseph’s Secondary School in September.
Edel’s sister, Pauline, isn’t long out of the school either and will be starting her Junior Certificate year in September, also at St Joseph’s.
The two sisters, who play camogie, admit they owe their start with the sport to their local national school, having both played for the Clare Primary Team. However, their dad Frank must also played a significant part in their fondness for the game, having hurled with Bodyke and played on the Brian Boru amalgamation who won the Clare Senior Hurling Championship in 1975.
While Edel looks forward to a fresh start in a new school, her older sister, Louise, is glad to be turning her back on the books after a tough year studying for her Leaving Certificate.
Antoinette is travelling down under in Australia and has extended her stay in Sydney, while Sinéad and David are both working in their respective professions in Shannon. 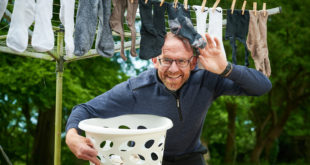