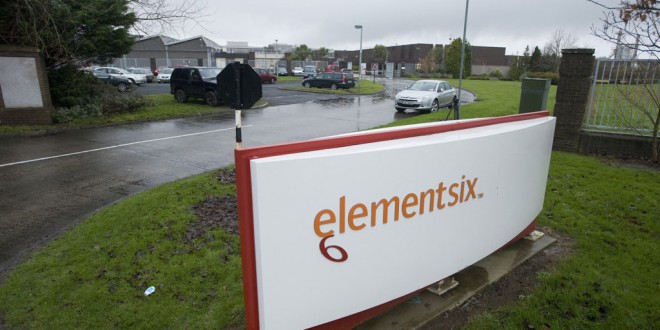 ELEMENT Six are taking on another 40 staff in Shannon and say that there is likely to be scope for further growth due to a €25 million capital investment and the relocation of €20 million of assets to the Shannon plant.

Five years ago the company announced redundancies and the overall number of Shannon employees dropped to 250. However it has since rebounded to around 360 and is now set to hit 400.

Walter Huhn, Chief Executive of Element Six, was in Shannon on Wednesday and he said that the painful cost cutting measures introduced in Shannon have secured the future of the plant, and led to a situation where it is now expanding again. “We started the restructuring in Shannon five years ago with a very clear focus on what we wanted to achieve, what we had to achieve because the global market was changing and the competitive environment was changing. We had to be even more of a high-end producer with a lot more flexibility. Innovation is key and that’s why he have invested a lot, but also flexibility and production is key which is why we had to do a lot of the restructuring. We’ve done it very successfully, we have a much more flexible organisation today so we can come back to Ireland and expand our footprint here.”

Shannon is benefiting from a company decision to consolidate its operations, which involves closing a plant in Sweden. Mr Huhn said that given the tens of millions being spent there is every chance that more jobs will be delivered to Shannon in the future. “We are making a significant investment, immediately its €20 million and we’re moving a huge chunk of quite valuable assets here. We wouldn’t do that if we didn’t hope we could grow further.”

The range of activity being undertaken at the Shannon plant will be increasing, he added, “The investment we are undergoing here is in the synthesis side of things, it’s all about very advanced material synthesis. Over the last number of years Shannon has been focussed on processing, on actually finalising the products. Now we are investing in synthesis again and it’s part of a bigger plan for Element Six. We are increasing our capabilities on the synthesis side, we need to be much faster in reacting to market demand, much faster in introducing new products because that’s just what today’s world is like.”

Executive Director, Group Operations Ken Sullivan said that he expects the jobs to be delivered over the next six to nine months and that a handful of new employees have already been recruited.

He said that in 2009 he feared the Shannon outlet would close, but things have turned around dramatically. “There has been continuous steady improvement in the performance of the site. We’ve seen improvements in output, in flexibility of the workforce, in the quality and customer service of what we’re delivering. There has been steady improvement over those years which is what has led to the situation of investment now. I certainly think the site has made good progress and is in a very good position right now, which is why the decision for this investment was made.”

While there were a number of factors behind the decision to expand the Shannon plant and axe the Swedish one, Mr Huhn said that the increasing competitiveness of Shannon was vital. “Being in the very north of Sweden is logistically problematic, it’s about how easy it is to hire fresh talent into places. There are more than just two or three components. To talk about Shannon in particular, the main driver that actually made it possible for us to invest in Shannon again is that we actually achieved what we wanted to achieve, with what was a very tough restructuring, but at the beginning of it we said that if we don’t do it, we don’t have a chance. We successfully implemented that and now we have the flexibility in Shannon.”

In the coming months high-pressure, high-temperature presses in conjunction with associated processing facilities will be installed in a new Advanced Materials Synthesis facility on the Shannon site. There will also be other incremental site upgrades made to further enhance the site’ production capacity and capabilities.

THE founder of a group of up to 40 home owners, whose properties are crumbling …